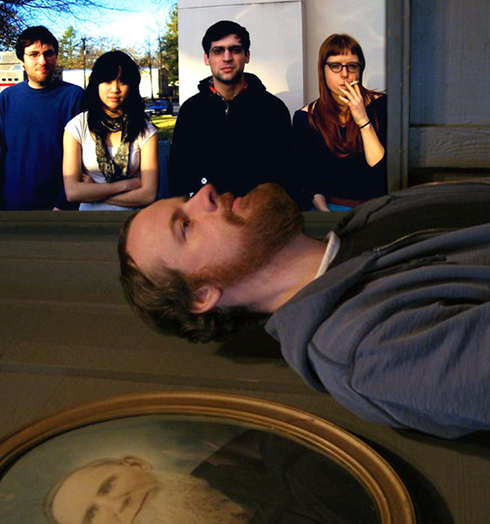 Folklore is the labor of love of Jimmy Hughes {Elf Power, Athens, GA resident musician}.  This time around, with Jimmy’s migration from Athens to Philadelphia, the line-up for this third Folklore album was filled out by a mini-orchestra of Philly folk. This mid-Atlantic region influence helped transform the lost bedroom project to a full-on live band.

Their latest album, Home Church Road, is so varied that it sounds like a indie-film soundtrack.  Each track bravely charges ahead without fear of connecting to a rewind or fast forward button.  The songs live in the present, flowing from chilly meandering experiments to folky melodies to electro-glitch to hook-laden rock anthems. The collection reminds me it takes more than just good intentions to craft cathartic challenges to traditional indie-rock conventions.

The beautiful gut-wrenching churning and distortion of “The Party” {listen} is reminiscent of early Neutral Milk Hotel’s “Everything Is” while tracks like “Mother River” tastefully pull from the vaults of Pavement and Unrest. “A Few Years Forward” mixes cacophony of horns, guitar distortion, and reverb vocals into a beautiful opening track that makes me weep with fuzzy Elephant Six tears. “Empty Houses” {listen} is part sweet sing along, part Tractor Tavern twang with a backdrop of barnyard quirk.

It just makes the deadline for inclusion on my list of favorite albums  released in the first half of 2011!