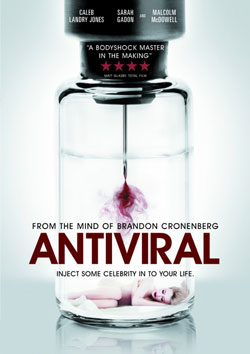 Antiviral is about an evolution in the way people view celebrity. Placed in a future bathed in clean white, the film centers on Syd, a salesman at a popular clinic where the commodity is live infections taken from celebs. A celeb gets infected or sick with something—herpes, the flu, etc.—and sells their virus to the clinic for a price, who in turn sells it back to super fans who want to be as close to that famous person as possible.

Gross, right? Imagine someone paying to get injected with Kim Kardashian's … whatever. Anyway, things get even more complicated, as it turns out Syd works with a friend who runs a “celebrity meat” butcher shop (cells from celebs are used to grow “steaks” that fans can buy and eat – ewwwwwwww) that's also a black market business for the viruses. And when Syd steals a deadly virus from a beautiful young star, it turns out he’s interfering with a much larger plan.

In the mood for something completely different? Mental is screening at the SIFF Film Center, 4/19-4/21.

Cringe-worthy in a different context, this Australian comedy is about the Moochmore family: Shirley, a mentally stressed mum to five girls who are constantly self-diagnosing themselves on the Internet is an embarrassment to her family and her fancy pants neighbors. Still, belting out tunes The Sound of Music in her backyard seems tame next to her best friend’s insistence that the two life-sized dolls she carts around are her “girls”.

When Dad (Anthony LaPaglia with an Aussie accent – what?!?!?) returns home after a two week break, Shirley takes off on “holiday”—read: mental hospital. Since he has to concentrate on his political campaign instead of his kids, Dad hires a kooky drifter named Shaz (Toni Collette, natch) off the side of the road to be their nanny.  Of course, she turns out to be exactly what’s needed to whip the Moochmore girls into Von Trapp-perfection, just the way mum imagined.

Mental is packed full of intentional kookiness—and yeah, maybe it sometimes tries a little too hard (one incident involving a practical joke and an all-white living room was a little rough to get through)—but the cast makes it work somehow. Lily Sullivan as the eldest Moochmore girl, Coral, really stands out. And in addition to LaPaglia, Liev Schrieber dons a scruffy beard and Aussie accent (BE STILL MY HEART) to play a shark hunter who stands in as an unconventional father figure.

It’s not quite as charming as Muriel’s Wedding (also helmed by Director and Writer PJ Hogan), the "mental illness is all about perception" thing gets a little old, and it becomes almost ridiculously unhinged by the end, but I was still pretty entertained. Maybe you'll like it too?