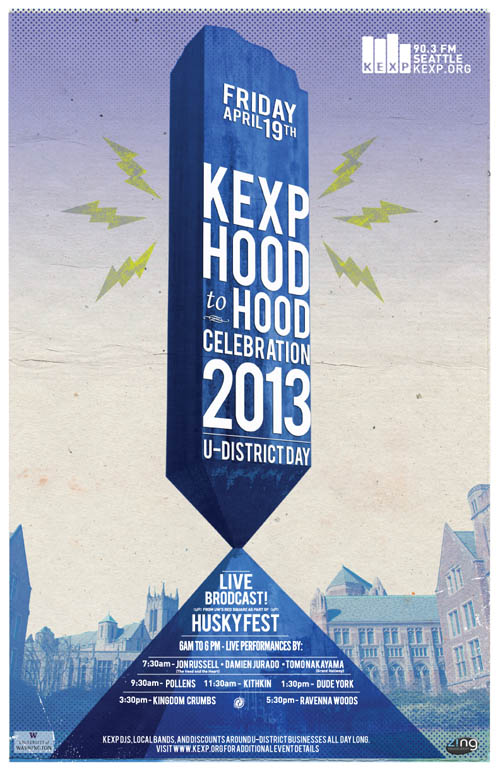 So, you're not one of the lucky folks with tickets to Prince? Fret not, dear imaginaries. There are endless options to get your music fix this weekend, between a bounty of shows, PopCon, Record Store Day, and KEXP's Hood-to-Hood Celebration — and that's barely the beginning of it.

Lace up those sneakers and make yourself a schedule! Here's some of the things we'll be out taking in over the next few days:

If you're reading this from your desk at work, it's likely you've already missed Jonathan Russell {The Head and the Heart}, Damien Jurado and Tomo Nakayama {Grand Hallway} opening up a day of live broadcasting and bands at Red Square. It's all happening as part of KEXP's Hood-to-Hood Day Celebration in the U District, going strong until 6pm tonight, with a ton of evening DJ sets and performances in area venues after that (PS, most are free). You can catch Alex, Larry Rose, Quilty 3000, see Pony Time play a live set, or check out a photo showcase as part of the Artwalk! There's also a Cafe Racer memorial benefit with Don Slack and Greg Vandy happening {at Cafe Racer, 8:30p, $5 suggested donation}. Check out the KEXP blog for more details.

There's a whole slew of people taking the stage at the Blue Moon tonight, but we're most excited about the show's opener, White Hawaiian. You know Jamie Aaron as the guitarist in Eighteen Individual Eyes and H is for Hellgate, and in this incarnation, she'll be bringing her dreamy, moody, lo-fi multi-track goodness solo style. Pop on over here to check out Jamie's Soundcloud vibes, and get yourself to the bar early as she'll be starting off the night. More info about the show (and the rest of the bands) at the Facebook event page here. 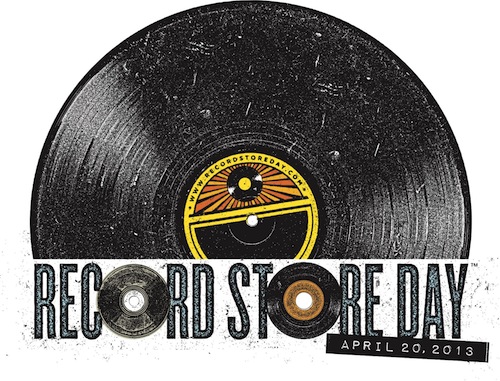 Don't party too hard on Friday night, kids: on Saturday, the annual goodness known as Record Store Day showers us with bliss in the form of one-time-only releases and live performances, with participation from practically every shop across our fair city. Sonic Boom has in-stores by Angel Olsen at 3p and Maps and Atlases at 4p, bands will be starting at the Queen Anne Silver Platters at 1p {with sets by The West, Family of the Year and Seacats}, and Easy Street has a Mad Season signing session {10a} and a Jeff Kleinsmith poster art exhibition — and that's just the tip of the iceberg. Use this handy link to check on all of your favorite record-buying locations and what they've got going on.

Once you've got that R.E.M. release in your hot little hands, head on down to the EMP for this year's Pop Conference. There's two sets of lightning-style talks, and features about Beatles to the best music-scene cities to the joys and woes of record collecting. We'll hear from Kevin Cole, Sean Nelson, Litsa Dremousis, Ma'Chell Duma LaVassar, Chris Kornelis, our own Chris Estey, John Roderick, Rachel Flotard, Charles Cross, James Keblas, and so many more.

If you're wondering whether sitting around listening to a bunch of panels all day will be totally awesome or not, let's not forget about the time Sean Nelson destroyed us with this. Registration starts at 8:30a and the show gets underway at 9a, so come as early as you can!

Once Saturday starts to wind down, there's plenty of show choices all over the city to indulge yourself in: Mirah is at St. Mark's Cathedral with the Moondoggies and Shenandoah Davis {tickets / $15 / 7p doors}, BOAT is at the Sunset, Fox and the Law are headlining at the Tractor, and Eldridge Gravy and the Court Supreme are at Neumos — just to name a few.

Pick your neighborhood, your vibe, and your budget, and get on out there!