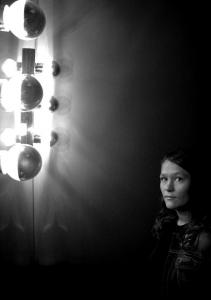 Anomie Belle is the project of multi-instrumentalist musician/composer Toby Campbell, whose music is often combining elements of classical, jazz, rock, pop and down tempo trip hop beats. It is often jarring and thought-provoking as she writes and sings about issues of social justice, political alienation and facing prejudices.

Campbell has managed to make a career out of being a musician by being able to do almost everything herself, including audio engineering but still enjoys getting the opportunity to play with other musicians when possible. Anomie Belle has played shows with such diverse artists as Tricky, The Album Leave, Azure Ray and will play in Portland next month with Kid Koala, before returning to Seattle to play Bumbershoot on Monday, September 7.

I met up with Campbell at a bar on Capitol Hill to talk about Anomie Belle, the state of the music business and the contrast between making music by yourself and collaborating with other artists.

How did you decide you wanted to become a musician?

I don’t feel like I decided to become a musician, I just feel like “I am a musician”. As a small child, I was always writing songs and as soon as my parents gave me a karaoke player, I started making multi-track recording, without knowing what I was doing, laying down a vocal part and a violin part. When I was ten or eleven, one of the men in my father’s a capella, barbershop quartet heard what I had been doing and asked if I was interested in coming into a recording studio. That was when I made my first record. I don’t feel like there ever was a time when I chose to be a musician.

But you were in a PhD program before working on music full-time, right?

I think I entered that because I felt like I needed to have a “real job” and I didn’t know how I was going to make a living as a musician, so I felt really scared about that but I also went that route because I do feel a strong commitment to social justice. I think there are issues like environmental degradation, racism and prejudice and consumerism that I always felt strongly about and there’s the commercialization of art in the music industry, so I went to school to study that kind of stuff and I realized that although I feel strongly about that and want to talk about that stuff in my music, as a career I wanted to be a musician.

You are a musician full-time then?

You also make a lot of film scores, in addition to the work in Anomie Belle. When you’re scoring a film, is it already made and the director hands you a DVD and says “I need some music here, here and here” or do you give your music to the filmmaker and have him or her insert it where it’s appropriate?

Usually the former, that’s usually the case. But in the case of the documentary film challenge I did with Reel Grrls, the filmmakers and I worked in creating the film and the music at the same time during that short timeframe we had to make that film. That was really fun because I got to have a feeling like I was a part of the team. I’ve been doing a lot of film scoring and a lot of original music for television shows. I’ve been able to write rock music and classical music and electronic music. It’s a wider array of music styles that I can write composing than I could for Anomie Belle.

You also make a lot of film scores, in addition to the work in Anomie Belle. When you’re scoring a film, is it already made and the director hands you a DVD and says “I need some music here, here and here” or do you give your music to the filmmaker and have him or her insert it where it’s appropriate?

You’ve played shows with artists like Tricky and The Album Leaf. What have you learned from artists like that?

I think Tricky is one of the pioneering folks in the genre of trip hop and has done an amazing job of integrating his own take on trip hop/hip hop with using female singers in a very sexy and beautiful way. He also has a live band, so it’s interesting to see him take electronic beats, the down-tempo beats, and translate that into a live performance. I think it was cool to tour with him and talk to him about that and how he does that.

With someone like Jimmy (LaValle) from The Album Leaf, who identifies himself, like I do, as a composer, and plays with a live band, it was awesome to talk to him about how he completes his live band and how he works with musicians in that process, as a composer. Also, how he has adapted his touring setup depending on the situation. When he was touring with Sigur Ros, he toured by himself and had to use a lot of looping and that is something that I’ve gotten into so I can play guitar or violin and sing over myself; it’s a way to compensate for not being able to have ten people on stage.

It’s been helpful to talk to these people who have been doing it for a while and see how they dealt with performing music and to learn from them and see how they compose and perform.I brought in some guest musicians because I really do enjoy collaborating and working with other people. There were a couple of women I was staying with at the time who were guests on the album and the saxophone player, who plays with me live (Bryan Smith), is on the album. But I basically did that album by myself at home.

On Sleeping Patterns, the first Anomie Belle record, did you do everything yourself on the album?

I brought in some guest musicians because I really do enjoy collaborating and working with other people. There were a couple of women I was staying with at the time who were guests on the album and the saxophone player, who plays with me live (Bryan Smith), is on the album. But I basically did that album by myself at home.

It does give you a lot of versatility because you can play with any number of people or by yourself and you can use loops and samples.

Yeah, I prefer to play with at least one other musician. When I tour, the usual setup is myself and looping and then my drummer (Erik Otteson). When I can, I love playing with a cellist, support players, multiple harmonies, horn players, etc… The more people the merrier.

How did you find the musicians who you play with in Anomie Belle?

Everyone that I have performed with live has kind of fallen into my lap; I feel really fortunate about that. Anna-Lynne Williams sang with me on the first record and she has toured with me on multiple tours. We met through a friend and started recording together and she ended up playing in the band. Another woman who sung with me and played keyboards, she came to see a lot of shows and approached me. My drummer also knew a lot of my music and approached me. The cellist approached me after hearing a film score that I had done recently. I feel fortunate because I haven’t had to look around for them, they have just fallen into my lap and they are already excited about playing together.

That also works out well with you providing a lot of the instrumentation yourself so that if something doesn’t work out, you can still continue. I’ve seen a lot of cases where bands have been on hiatus for several months because they couldn’t find a guitarist or someone to play bass.

I have to admit that that is a nice thing about being a composer. Being a composer does have its advantages but it’s also hard because I have to think of what kind of music it makes sense to work with. In a sense, people want to be writing their own parts and be an integral part of the band and I think that is often what people are looking for. I am sort of a composer and I do sort of write all of the parts so I have to be careful to make sure that people I work with are okay with that. It’s been a learning curve and I’ve been learning that along the way.

You’ve played with Tricky and The Album Leaf and will play with Kid Koala and their audiences overlap only minimally. Was your taste in music always that eclectic?

What is coming up for Anomie Belle?

We’re playing a show in Portland with Kid Koala and another electronic artist and I have an EP coming out at the end of the year and an album coming out next year, which we’ll then be shopping around to labels.