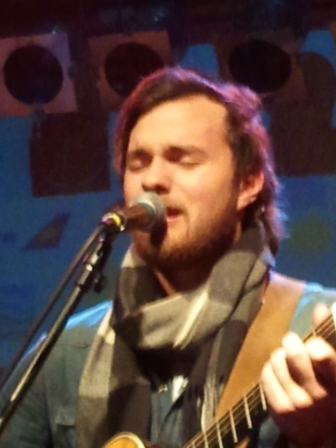 It is a little-known fact that skill in poetry was valued just as highly in Viking society as skill in battle. Perhaps this explains why Iceland, a nation founded by Vikings, has more than its fair share of brilliant songwriters. Unless you were listening to KEXP at 3 pm on Thursday, or made it to Neumos on Friday night, you probably have not heard of the latest musical conqueror to sail out of Iceland – Ásgeir Trausti.

His debut album, Dýrð í dauðaƥögn, sold out in about a week in Iceland. Its understated, acoustic folk melodies interwoven with electronic thread landed him on KEXP’s radar. Ásgeir Trausti Einarsson and collaborator Julius Róbertsson were kind enough to talk to us on Friday before opening the Reykjavík Calling show at Neumos. Although he could probably throw a spear as well as any saga hero (no really, keep reading) at our interview the soft-spoken Ásgeir looks more Ave-rat than Viking as he leans forward in his chair, drumming  on his knees.

TIG: First of all, let me start by apologizing. I am sure that I am going to butcher the pronunciation of the album title and all the names of the songs. Please correct me! Can you tell me about the name of the album?

AT: It is the name of one of the songs on the album, “Dýrð í dauðaƥögn.” The direct translation is “Glory in Dead Silence.” The meaning is not straightforward, even in Icelandic. There is no one meaning behind it. It’s for everyone to think about.

TIG: So it’s not an Icelandic expression?

AT: No, he [nodding at Julius] came up with it.

JR: I didn’t write any songs on the album, I only wrote the lyrics to “Dýrð í dauðaƥögn” and two others.

TIG: You are planning to release an English version of the album. If even translating the album title is a challenge, how is it going to be for the whole album?

AT: John Grant is doing that. I think he hasn’t finished any lyrics yet, I haven’t seen anything yet. I think he is not going to do the translation straight, he is going to try to get the meaning out of the lyrics.

TIG: Are you going to work with him on that, or is he doing it all himself?

AT: We have not been working with him that much. I’ll probably see him a few times. But we have handed the straight translation to him.

TIG: So you have the direct translation, and he will work it into an English lyric?

TIG: Besides the three songs that Julius wrote lyrics for, your dad wrote all the lyrics on the album. How does that work? I don’t think a lot of Americans would be making music with their parents.

AT: He is just a great lyricist. He has been writing since he was a young boy. He also has written lyrics for my brother’s band, Hjálmar.

TIG: So does he just write lyrics and you make a song to fit, or…

AT: No, it’s just the opposite. I write a song and give it to him.

TIG: The name of the project is Ásgeir Trausti, which is your name, and tonight you are playing as a duo. On YouTube, I see seven or more people on stage with you. Is this a solo project?

JR: It is his solo project.

AT: Julius has played with me for some years. It is nice to have the option for the two of us to play acoustic. Sometimes there is the full band.

TIG: How do you adapt to play a different configuration for every show?

AT: It depends how big the show. With the full band, we prepare a lot. There are electronic samples, and it is more complicated. But we [points to Julius] used to play together. We can just play the songs.

JR: Maybe there is some improvisation when we play just the two of us.

AT: We try to have it be different every time. It’s more fun that way.

TIG: A year ago, you were in The Lovely Lion, maybe even considering an athletic career, and now you are playing international shows with your solo project. How did that happen?

AT: Actually, The Lovely Lion started at the same time [as Glory in Dead Silence]. I was a javelin thrower from age 13. Then I was injured at 17. So I tried to keep up training, and hoped to compete again. I was still learning classical guitar, and about a year and a half ago, decided to focus on music. The songs on the album were written over a one year period. Actually, I thought that The Lovely Lion would be the main thing. We are still working on some songs when we can, and hope to release an album next year or the year after.

TIG: Now that your solo project has taken off, do you have any big plans for touring?

AT: I never had any big plans for anything. It was my first time in a real studio in the beginning of this year. Everything just took off upwards from there. I hope it stays that way.

TIG: Okay, no big plans, but you’re certainly busy. I lost count of how many times you show up on the Iceland Airwaves schedule.

AT: Ten off-venue, as a duo with Julius, and I think two or three on-venue shows with a full band.

TIG: Julius, when you are not playing duos with Ásgeir, are you in other bands?

JR: No, I’m not involved in other music. I was a bridge builder for eight years in Iceland. Now, I am in school, and play with Ásgeir. I have been playing for myself for 15 years. Until this trip, I had never been in another country.

TIG: What are you studying?

[Julius and Ásgeir confer, searching for the English]

JR: The literal translation is “house-building.” I’m not sure how you would say it in English.

TIG: Are you doing anything interesting while you are here?

AT: Yesterday we took a taxi to the house of Kurt Cobain, and then walked back to home, to the hotel. We got lost… the whole time really. It took about three hours. We will also go to the exhibit – the grunge exhibit at the museum.

TIG: You said on KEXP yesterday that Kurt Cobain was a big influence. But I don’t hear that in your music.

AT: Nirvana was a big influence when I was younger. When I was eight, it was the only music I listened to. I played in some bands that sort of played grunge. I guess I grew out of it.

TIG: And who is influencing your music now?

AT: I’m listening to Bon Iver – Justin Vernon, lots; Tallest Man on the Earth, from Sweden, for finger picking style; and for electronic, James Blake. I always loved Hjálmar, but no musical influence. My brother’s a great guitar player and singer, and had a big role in how I play. A lot of bands in Iceland are great.

TIG: What comes after Airwaves?

AT: We have some more gigs in Iceland, Eurosonic in January. My manager keeps it all under control – I don’t keep count. We’ll just try to focus on the English version. Try it out and see what it sounds like.