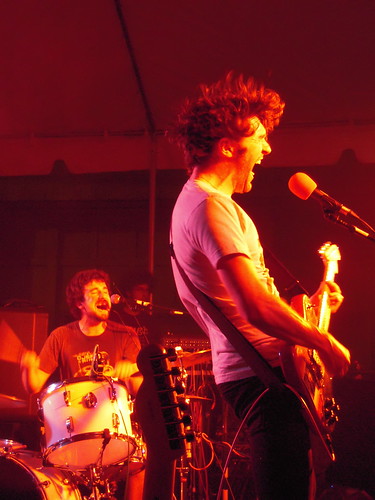 If you are looking for a band that embodies the essence of every completely generic moment in high school that felt momentous because of a song (and i know you are), but you’re too old to believe in the importance of inconsequential instants (which i hope you’re not), then the Vancouver based duo Japandroids are for you. Dave Prowse and Brian King blend together noisy yet melodic guitar and pulsing drums to match the boiling blood of teenagers in grown-up lives. Their shared screaming duties deliver angst to even their most thoughtful lyrics, layering meaning in that way in which everything meant too much when you were younger. Go ahead, read this interview and give your Tuesday a heavy injection of the way things used to feel when Japandroids play Chop Suey on the 1st of December.

Hey even if Japandroids is no where near where you hid your high school journal, at least you can go and watch Brian’s curly locks blowing back in the wind of his tour fan. Or who knows, maybe he’ll rock a shoe off like he did at Capitol Hill Block Party. 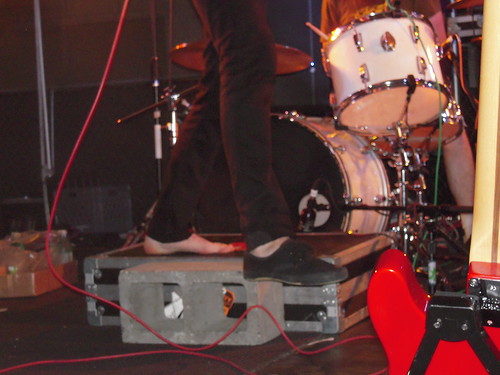 TIG: How long have you guys known each other and when did playing together take on the identity of Japandroids?

Dave Prowse: Brian and I met in university back in the fall of 2000. We didn’t start jamming together until 2005 and became Japandroids and started playing shows and stuff in 2006.

TIG: When writing songs what do you start with? With only the two you, what’s the songwriting process like?

Dave Prowse: There’s not really a set formula when it comes to writing songs. Sometimes Brian brings in stuff that he’s been working on at home, other times we’ll just jam stuff out. It’s kind of random, to be honest.

TIG: I know you guys originally intended to have a third member in the band to take vocals duties. Do you think you will ever involve more members and instruments in the band?

Dave Prowse: We’ve gotten really used to being a two piece and the dynamic we’ve got going just seems to work. I could see maybe collaborating at some point with someone, but I don’t see us ever adding another permanent member to the band. The big thing we wanted to add back in the day was a vocalist, but we’ve gotten really used to singing now and I’m not so sure we’d want to give that up these days.

TIG: So, how do you guys work out lyrics? You both sing/shout, are the lyrics collaborative?

TIG: Your music is pretty heavy, but your lyrics can be tongue in cheek at times. Is this a balance you guys were going for?

TIG: A lot of the more tongue in cheek lyrics seem to be directed towards Vancouver or girls. For instance in a song like “Boys Are Leaving Town” there seems to be a desire to grow out of Vanouver’s scene but an uncertainty of how you will find a way back “home.” Despite your ambivalent feelings about Vancouver the city does seem to be a lyrical influence in your songs. Do you think that being away from home and on the road more often makes you feel differently about Vancouver? Do you miss it or appreciate it more?

Dave Prowse: Both. I definitely have a love/hate relationship with Vancouver, and I think Brian does too. There’s a lot of really wonderful people there that I miss when I’m on the road, and it’s also just an incredibly beautiful city. But you also notice that the music scene is pretty small and not nearly as supportive and exciting as some other cities.

TIG: When asked before about the name of your album, Post-Nothing, you said it was the less pretentious option of your original idea to call the album Post-Everything. Either way you cut it, it seems you guys are making a comment on how it’s unavoidable to be post-something these days. Do you feel that you embrace your influences and that there is a sound you are trying to breath life back into? Or are you critical of all the bands trying to revive older music genres?

Dave Prowse: I think that Post-Nothing is more of a jab at people’s need to label music and create new sub-genres all the time more than a crack at bands that sound like other bands. It’s pretty hard to make wholly original music these days, and all bands are ripping somebody off whether they admit it or not. I guess the trick is to rip off a bunch of bands so it’s not quite so obvious who you’re ripping off!

TIG: Your myspace page mentions that you are “two sweethearts still naïve enough to believe you will never sell out.” What does selling out mean to you?

Dave Prowse: Doing anything related to the 2010 Olympics.

TIG: Do you have plans for another release anytime soon? Have been writing while on the road?

Dave Prowse: Well, we tour in a Ford Explorer so there’s not much space to sit back and work on music. We’re re-releasing our two EPs as a compilation called “No Singles” in the spring. We’re going to try to put out a couple of 7 inch singles over the summer. Then hopefully we can record a new full length in the fall. We keep getting awesome offers to tour to really cool places and play fun shows so it’s hard to take time off to work on new stuff.

TIG: When I saw you guys play at Capitol Hill Block Party there was a fan blowing back Brian’s hair and, at the time, I imagined it was his vanity fan that you guys take on tour to give his hair as much momentum as your songs. Was it just hot, or do you really bring the fan with you to shows?

Dave Prowse: Brian has played shows with that fan in tow ever since I can remember. He says it’s to cool him down at shows. Many people (myself included) have speculated as to whether that is it’s main function. It does get hot up there though… 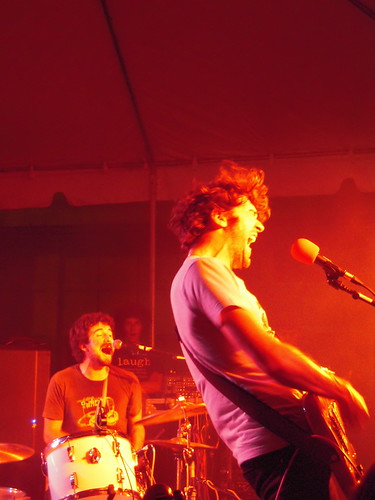