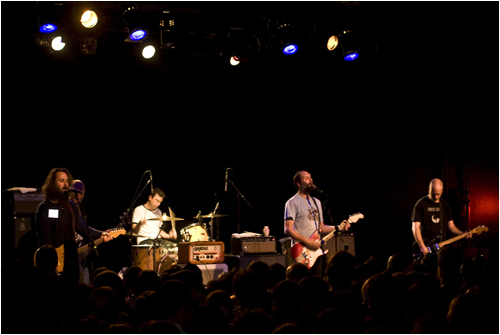 Built to Spill came out with an energetic show, an abundance of talent and a prime selection of songs including many off their latest release There Is No Enemy. And for a band that has being playing the hits since 1992, they seemed to have a revised sense of energy and urgency.

Fans crowded in to the Showbox Green Room early for Friday night’s sold out show. Some were hoping to score tickets, others were scarfing down much needed corndogs, but everyone was emphatically discussing which songs they hoped to hear. “I hope Doug plays ‘Kicked It In The Sun'” one women literally shouted at her friend – while at the same time trying to convince Showbox security to let her up to the clearly closed off box office to buy a ticket. And the chatter didn’t stop in the venue or during their set. In fact, the intensity of some of the fans was a little distracting. During a lovely selection of songs, the audience kept yelling out favorites like “Strange,” “Stab” and “Liar.” One guy worked himself up into such a frenzy during a twenty minute rendition of “Conventional Wisdom” that he jumped up on to the stage after the song ended to give Doug a HUGE hug (before being promptly escorted out of the venue by security). But maybe the audience was picking up on something very rare and real – a chance to hear Built to Spill, energized from a new album, play old songs with renewed intensity. And I have to admit, despite the distractions, it was pretty magic.

Accompanying BTS was Disco Doom, from Switzerland, and Finn Riggins, of Idaho. Disco Doom played a solid distortion soaked set that felt a little bit too much like 1997. So it was openers Finn Riggins that got the crowd buttered up for the night. Anthemic stompers like “Wake (Keep This Town Alive)” are the reason they went from playing the tiny Blue Moon in October (proof) to the Showbox in about a month.

Here are a selection of photos from the night:

{Be sure to check out the whole set of shots from the show in the imaginary flickr pool – photos by me!}