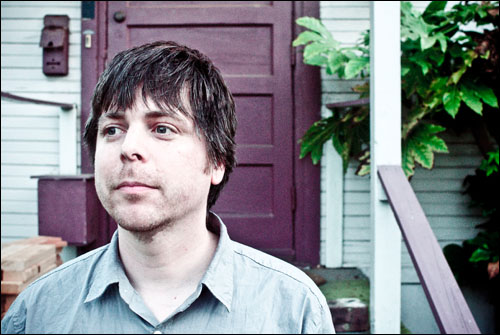 Here at TIG, we love John Goodmanson. Not only has he worked to make some of our favorite artists sound a-mazing (from Los Campesinos, Wedding Present and The Gossip to The Blood Brothers, Bikini Kill and The Lashes), but he is also, just a great guy. So, as we finish our studio diaries with Black Whales, we couldn’t resist a short interview with John about the process. Here’s what we got.

1.  What was your approach to making/recording the Black Whales record?

To capture the group sounding great in a room together.  Their songs were pretty well worked out, so really getting the live performance of the basic track was key.

2.  Were there certain elements of the band that you felt needed to be captured or emphasized?

We changed up the micing of the drum kit quite a bit from song to song – trying to keep things interesting.  Also, the way the rhythm guitar and the drums locked was really important.  I think we kept the live guitar for almost all of the songs on the record.

3.  What was the most challenging part of making this record?

Seems like everyone in this band is a breeze to be around — we mostly had a lot of fun and went for it.  Also, Davey brought a lot of Molly Moon’s ice cream so how challenging could it get, really?

4.  Rumor is you can do actual tape edits with a razor blade….if you had to do that today, are you skills up to speed?

I can chop that shit like Benihana.  It’s actually very easy – but the band treat you like God after.  Damn I miss tape.

When Bikini Kill showed up with mostly broken equipment and it became clear that using their own stuff was really the best way to record them (they could have used my instruments, but what would have been the point?), I realized it wasn’t about the gear. I do love my vintage Compex limiter, though.

6.  If Eddie Vedder were to make a trance album or Ben Gibbard a latin fusion record, which would you rather produce?

Hmmm, I bet Eddie brings better wine to the session… but then there are actual instruments to record on a Latin Fusion record. Could I just make a reggaeton record with Billie Joe Armstrong?  You KNOW it’s a million dollar idea.

7.  What’s a quick studio remedy for out of time drummers, wanking guitar players, out of tune singers and slap bass?

Pro Tools and Auto Tune will fix these things, but you’re better off turning your limitations to your advantage.  Except for the slap bass.  Shoot that guy.

8.  What song have you had the most fun creating with Black Whales on this record?

Man, there are a bunch of great songs.  I really like “Shangri-la Indeed” and “Youngblood”.  Also “Books on Tape”.  That one might have the best title.  Go with that.

9.  Why do you have 4 pictures of crying children on the wall of your studio? Is that what happens if a band does not practice before working with you?

{Got a favorite Goodmanson joint? Let us know in the comments. And find out more about John at his killer site here}