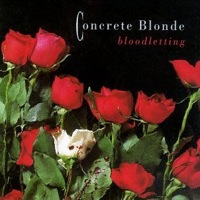 I’ve already declared my adoration for Concrete Blonde, and recommended you come see the show with me tonight (Thursday, June 24) at The Showbox – and now I get to present something super-awesome: I asked Johnette Napolitano a few questions via email about Bloodletting and this 20-years-later tour, and she responded with some great answers:

What was the inspiration to move from your previous punk rock vibe to a more gothic feel for Bloodletting?
Being other places in the world, and I’d never been anywhere but California, and Tennessee was the first place I lived other than LA, really. That was our third record and we’d toured a lot by then and I’d spent a lot of time – and I still do – in New Orleans and the South, and I love it down there and it’s moody, for sure. Fucks with my hair something awful, but well worth it.

Do you think it’s awesome or hilarious that “Bloodletting (The Vampire Song)” became a Goth club standard in the 90s?
Awesome, hilarious, horrible, scary, weird, surreal, beautiful, a pain in the ass and very, very lucrative.

What was the catalyst for re-releasing this album and how does it feel to be touring with it again?
20 years seems to have gone by. A perfect storm, really. I lost my Dad and am still very much dealing with that, and he would have said, do it! He was very proud of the band. Never quite came out and told me so, but he didn’t have to. I played for him the last time I saw him, he’d bought a guitar for himself. Only he and I would know what that gesture meant…I see a future for myself that I like, and I’m very lucky, we’re very lucky, to still have an audience that would actually show up. That never ceases to amaze me. We’ll have a great time and I’ll come off and write and paint and work on opening a Flamenco place in New Orleans and we’ll just play where we want to play, when we want. It’s a good place to be.

Any chance we’ll see a new Concrete Blonde album emerge from this reunion (a girl can hope!)?
I’m hoping that we’re not killing each other by week two. We won’t though, everybody seems to be working in the same direction and after the last year basically a month of playing and sleeping on a bus while somebody else gets me there sounds good. I’m looking forward to it; I know we all are. I’ll let the music take over and see where it goes.