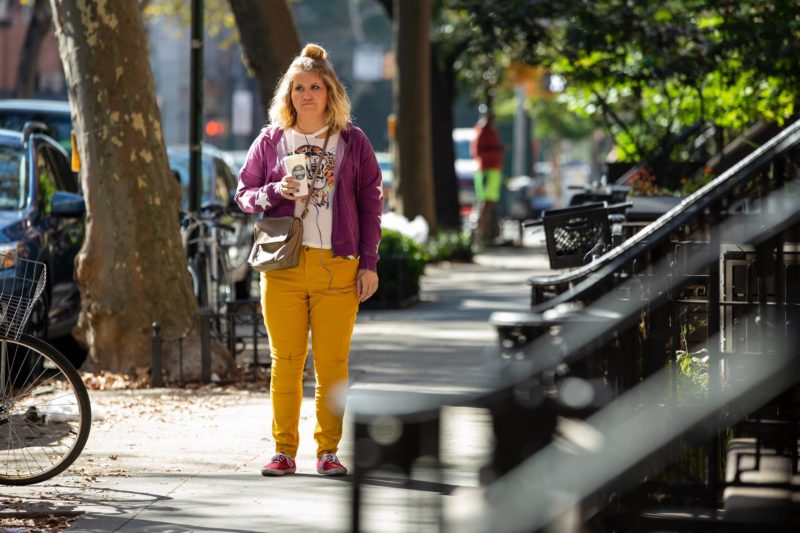 I wasn’t sure what to expect going into Brittany Runs a Marathon earlier this year at SIFF, but I was TERRIFIED it would be the same old-same old tune of body shaming, ridiculous beauty standard B.S. message of, “Everyone just needs to be thin to be happy!”

Fortunately, that was NOT the case. Brittany is a multi-layered story about a woman starting to take a good look at herself and making a little change that turns into a BIG change — but is still, ultimately, suffering because she’s sabotaging herself at every turn. It’s hilarious, and emotional, and just charming as hell and Jillian Bell blew me away as the title character.

During the festival I got to talk with writer and director Paul Downs Colaizzo about the real-life inspiration for this very relatable story, and express my admiration for him consciously trying to make something that was respectful, honest, and explorative — and very different from what you normally see on screen:

TIG: So even though I knew this is the question that everybody’s going to ask you, let’s start at the beginning and talk about why you felt like you needed to write and direct this film. Where did the idea come from, and why did you think it was important to put it on screen?

Paul Downs Colaizzo: Well, two parts – one is, I was living with my friend Britney when she decided that she wanted to change her life and she went for her first run, and I thought, “That’s a film, for sure,” I just had a feeling that this should be a movie. And then I outlined the film very quickly, and things that I’d outlined started happening in real life — in her life — which is crazy.

But in writing the story, I knew it was going to be a story about a woman that was against herself in a lot of ways, and I wanted to do that in a way that was illuminating and respectful, and honest, and true to that crazy and tumultuous and extending, and painful journey that Brittany was going on.

So when it came time to go into production and figure out who was going to direct this thing, I wanted to protect it. I loved her; I loved my friend Brittany and I loved the character Brittany; I loved the story, and I knew that it was going to have to be handled with a delicate touch to maintain its irreverence — with its respect, with its dignity, with it’s humor. And because I had written it, I knew where all these things were. And I was pained at the idea that it could go wrong. So I just didn’t want it to go wrong. That’s why I had to direct it.

TIG: So are you a runner yourself?

TIG: When Brittany started running did she want you to join her, or was she just doing her own thing?

PDC: No, there was never … actually what a jerk! She never even invited me to go with her.

TIG: [laughing] Well one of the things that I really appreciated about the film is that you made it really clear that Brittany losing weight and being thinner didn’t automatically equal her happiness, which is honestly a pretty evolved viewpoint I think — even still even now in 2019.

So I just found that really fascinating. And related to that, I really appreciated that you actually had the doctor tell her that, “there are fat people who are healthy and you’re just not one of them.” I feel I feel like hearing that in the film felt like a REALLY BIG DEAL to me as a woman who has been thin and has been fat — and is currently fat — because I feel like we need to see that reflected more in pop culture.

Was that something that just sort of organically happened within the screenplay, or did you make a conscious note to make sure that message was in there and that the movie wasn’t just saying, “If you’re fat you’re unhappy, and if you’re thin you’re happy?”

PDC: I mean it was a little bit of both; when I was writing the story, it actually kept moving even further than that, which was the thinner she got, the more unhappy she got. You know the midpoint of our film, she looks at herself in the mirror and naked and has a moment of contentment. And really very quickly after that, she starts to focus on the wrong things and then she sets the rules up about her own weight, and her selfies, and how she looks to the world. And we understand why — we see that how the world treats her differently when she looks a different way.

And it was important to me that those moments where we see how the world treats her that the film had no point of view on them. I just wanted it to be like, you know we live in a world — that’s a given; this world works a certain way — that’s a given. How do we draw a story to conclude that in an honest way that doesn’t glorify unfortunate realities about how our world treats a woman differently depending on how she looks.

So the task became giving Brittany value judgments on certain things, and giving Brittany pride, and embarrassment, and flattery with certain confidence and letting the movie observe her doing that.

TIG: That’s great. I really, really like it. And like I said, I really appreciate that — not just the honesty, but also sort of this knowledge that you didn’t want to put the wrong message out there. I think that’s pretty incredible, honestly.

PDC: Thank you! The thing about that is, is that then it was like — word by word making sure that that was what we were doing. You know?

TIG: Continuing to talk about Brittany’s character arc; there are several moments where she says some pretty awful things to other people in the movie — in particular when she’s at her brother-in-law’s birthday party. Did you ever worry that those moments would make her character too unlikable?

PDC: I never worried about it, because the goal was to have you so on board with this person. And as mean as she is to that other woman, and she is brutally mean — you feel terrible for that woman, and as mean as she is — you feel bad for her [Brittany]. If we had taken that down a little bit, ] I don’t think he would have gotten what we’ve gotten. And honestly, there are key moments in the film where the audience reaction the way that I don’t even know how to describe in words — and that’s one of them. And having them all stay on board and get really emotional has been really rewarding in that moment.

When she’s speaking to that woman — the story is of a woman who is going against herself. She is the protagonist and absolutely the antagonist, which makes it kind of a unique film, right? There’s no dragon that needs to be slayed in an external way. So at her rock bottom, when it’s her against herself, how do you do that? And ultimately in that scene she’s yelling at herself.

TIG: So since this is based on a real person that you’re presumably still friends with, has she seen it? And how does she feel about the fictionalized version of herself?

PDC: She loves it. She’s seen it; she came to the premiere at Sundance and we cried a lot. I invited her into the editing bay to see the first cut of it. You know, she’s very supportive. And it’s funny — I said, “Hey do you care if I call her Brittany, because I love you,” and then the only time I got to be a moment where we thought we might need to change that was when we were making the press notes for Sundance. And it was, “Based on his real friend – a drunk mess …” We were like, …. WAIT.

TIG: How did you find Jillian Bell? Because she’s perfect.

PDC: We had sent a script out to the industry — Jillian’s manager read it, sent it to here and said, “Look; you’re going to read the first 10 pages of the script and you’re going to be really scared. But I want you to finish reading it because it’s a beautiful story.” And Jillian read it, and I think she read it a few times and I got a call that she was very into it. And so we met and then we had a couple more phone calls. She’s such a brilliant actress in a way that I don’t think people really understood the depths of her talent until this film.And she you know she really wants you to have her — and she put in such an incredible amount of work physically, mentally, spiritually to get ready to film this thing.

TIG: Yeah. She was incredible. She was great. I think it’s a very hard job for an actress even even with such a strong script to be likable when they’re still being mean and you know, it’s a very delicate balance.

PDC: Yeah, because you have to be vulnerable and aggressive.

TIG: What is next for you? Is there anything you can talk about that you’re working on currently?

PDC: I’ve been working on a screenplay that is very different than Brittany, but it is asking an audience to empathize with the character that they would typically not be asked to empathize with. I’d say that’s the common thread. But that’s all I can say about it I guess.

TIG: I always like to close my interviews by asking what kind of music were you listening to you when you were writing this script, or getting ready to film it, or even during filming.

PDC: That is such a good, funny, apt question because I was having dinner with a friend that I met at Sundance just last week and there was a script going around that she was reading that a really good script, it’s very dark – and he asked, “Did you read it?” and I said, “Yeah, It’s really good.” “Are you going to meet on it?” And I said, “NO. I’m not.” I said, “I just need a little Kelly Clarkson in my life.”

TIG: So does that mean you were listening to Kelly Clarkson and or other poppy sort of feelgood types of tunes while you were writing this?

PDC: No; that’s just me. I’m not somebody who listens to a song from I can light a candle and look out of your window and go … wow. I just need an upper. And that’s gonna be Kelly Clarkson; she’s pretty up there.

Brittany Runs a Marathon opens in Seattle August 30 at SIFF Cinema Egyptian. Get tickets as SIFF.net!