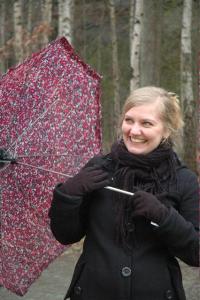 When songs from Sally Shapiro’s debut album, Disco Romance, began showing up on mp3 blogs and music websites, there was not a lot known about the reclusive Swedish pop star, including her name. “Sally Shapiro” is the name of both the anonymous Swedish pop singer and the duo between producer Johan Agebjörn and the anonymous singer. She is known for refusing to play her songs live, or even record her vocals with anyone else in the same room. Still, it’s a beautiful idea that someone could succeed making excellent pop music free of the pressure of becoming a pop star.

Sally Shapiro’s latest album, My Guilty Pleasure, like its predecessor, is a dazzling collection of Italo Disco songs that blends Agebjörn’s production values over Shapiro’s gorgeous, breathy harmonies. The songs are often melancholic and wistful, but still sound as though they belong in dance clubs, on mix CDs for potential partners and to be heard individually on your iPod. The album comes out on August 25 on Paper Bag Records.

I spoke with Shapiro by phone from her home in Sweden to discuss making this album, the expectations that came with having a popular debut album and why, exactly, is Sweden home to so much great pop music.

How did the making of My Guilty Pleasure differ from making your previous album, Disco Romance?

When we made the first record, we had no pressure. We just thought it would be for disco nerds in Europe, who like that genre, so there was no pressure on us. But then when people heard the first one and liked it, we had a lot more pressure to make this one. We didn’t even think there would be a second one. But then we had the inspiration and made a couple of tracks and then we made a couple more and then we had enough for a record.

I really liked both albums, especially this new one, but I can’t believe you didn’t expect anyone other than Italo Disco fans to hear Disco Romance.

Yeah, we really thought it would be like that because Johan uploaded our first track to this forum for Italo Disco fans and [people there] liked it and then there was this label that wanted to release it as a single, so we had to make another track and then we made more and there was enough for an album. But we really thought it would be for people who liked this music and really not much more. But then people who liked indie pop, many of them liked this, and then it became bigger than we expected it to be.

Do you think that because there was pressure between Disco Romance and My Guilty Pleasure, do you ever think there will be enough pressure that you have to start playing songs live?

There has been pressure. That’s why we did the DJ dates in North America (last year) to see if we liked standing onstage, or if I liked standing onstage, which I did not. Now, I’ve been more comfortable in the decision not to play this music since I really feel that is not my thing, going on tour and stuff like that. I like having this music making as a hobby, also, and then you can do tracks when you get inspired and don’t have to make them to get the money. You can make them because you like to be doing it. I like it this way.

I really don’t think that it would be possible for, say, fifteen years ago, prior to the internet, if I would have been able to have even heard about your music.

No, I don’t think so because it is easier to spread your music, much easier. Now some people in Sweden like it, but with the first album, people outside of Sweden also liked it, which were people we did not have any contact with.

Is there something in Sweden that has made it responsible for a disproportionate amount of really good pop music? It’s not a terribly big country population-wise but there is a great roster of Swedish pop acts: you, Robyn, Lykke Li, Peter, Bjorn and John, Jens Lekman, Nina Persson’s bands: The Cardigans and now A Camp, I could really go on for quite a while.

I don’t know if you have it in the states but here, the Swedish state finances kids to learn to play instruments in something called Music School, it really costs like nothing, so many people in Sweden know how to play instruments because they went to Music School when between like ten and fifteen years. Young people know how to handle an instrument and end up playing in bands. Sweden’s not really a poor country, so they can earn money and choose not to work and can live on the money that they earned through music. Maybe that’s not possible in all countries.

How do you work on songs? How does your songwriting process work?

It mostly begins with Johan having an idea for a track. He plays it on a piano and I listen to it and tell him whether or not I like it. If I like it, he continues to do the production and then passes it over to me and I say what I like or don’t like about it. After that, we sing together and then we write together; Johan writes a bit more and then he hands it over to me and I write a bit and so on. After that, we record it.

I’m sure it varies, but how long does it take to write a typical song?

It really depends on the inspiration. Mostly we wait until Johan has inspiration for a track and then when he has an idea, we start working on it. Maybe it takes two or three weeks because we aren’t doing this as our full-time job, we’re doing it in our spare time.

Do you have a full-time job, then, besides being a musician?

I have a job, a normal job. This is my hobby.

Do you any expectations for how My Guilty Pleasure will be judged, versus how Disco Romance was received?

I think some people will think that it isn’t new anymore, so maybe they won’t like it as much as the first one, but I’m not sure.