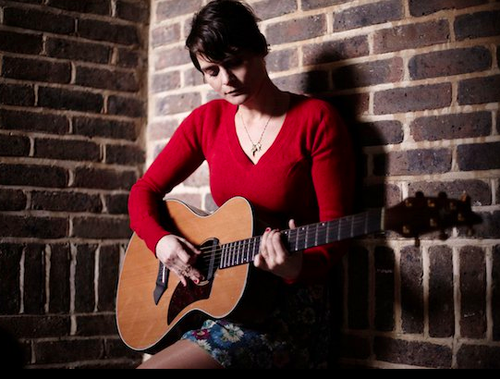 Sophie Barker is a wonderful secret among the music community. Although she has managed to remain just below the radar of renown, she has been releasing music since 1996, both as a solo artist and in the form of collaborations, the most prominent of which has been with downtempo group Zero 7. The British songwriter released Seagull last year, a reflective collection of songs that she is extremely pleased with. Sophie is also just about to embark on a West coast tour of the United States and she will be making a stop in Seattle this Saturday, November 3rd, at the High Dive. We had the chance to check in with her and she provided some insights on her rich recording history and personal endeavors.

Your newest record, Seagull, is more intimate than previous recordings. Was there a conscious effort to approach creating and recording the album differently than previously employed?

Genuinely, I allow every thought to flow — my creative ideas just seem to happen in the moment and reflect what I am feeling at the time, and more often than not, they seem to reflect what is happening around me. Seagull came about a feeling of change in what was happening or rather not happening in the world around me. I felt that nothing was connecting and I was looking at the world from the outside in and when the recession hit, it was almost like a veil of vanity and greed had been lifted allowing human beings to have an opportunity to begin properly communicating beyond their veneer, forcing us to become more conscious or aware of other circumstances around us. I also luckily met the right people to produce the album, Alex Pilkington and Mark Tucker, who understood my emotional and musical sensitivity.

Seagull took about five years to come together from when the first songs were written in 2006. Was this an album that morphed over time from its original intention or did it just take time for the tracks to meld together in a cohesive collection?

The reason it took five years is because I couldn't find the right team to produce the sound that I wanted. I went through so many changing musical outfits and all of them were nearly, but not quite — I nearly let the album go and then I just let go and had the faith that I would know when the right people would come along — I knew that this album was instrumental in how I would move forward musically and suddenly I found the musical match in heaven.

How has your songwriting process evolved over time? Did your involvement with Zero 7 or others have an impact on how you approach writing songs or is the process completely separate when you work on your solo material?

The only thing that I have learnt about myself is that it is either there or not, so the way I respond to music and life is experiential hence live — all the songs I have ever written in my life have always come through me and if it takes too much time or is a painful process then it isn't right — I have not changed, but through time have learnt to be more confident with my immediate feeling towards whatever experience is coming towards me as everything that you respond to is a relationship in itself, whether it be writing a song or the way you make a cup of tea- be present in everything you do!

You will be performing in Seattle on Saturday evening, November 3rd. Will this be a solo acoustic show or will you have a band with you? What format can the audience expect and will there be any surprises?

This time, we will be full band and they are amazing — I can't wait to show them to the world and how much of a privilege it is to have these incredible human beings, who happen to be extraordinary musicians, support me on my musical journey — and there may well be a few surprises….

Do you have any plans to work with Zero 7 again in the future?

I am always open to work with people who I have had a fantastic experience with.

Your recent cover of "A Forest" by The Cure is an interesting take on the song. Where the original version is stark, vulnerable and desperate, your rendition offers a more skeptical female perspective. How did this come together? Was it a song that you always wanted to cover or did it happen spontaneously?

I have always loved this song and what I adore about it is that it is such a good song and something that I couldn't have written myself, but as a performer it represented in me something that I wanted to explore — I felt that I could translate it as a woman as I feel in many ways Robert Smith is genderless in the way he writes, which is a gift — allowing me not only to sing a song that I think is incredible, but that I can make my own interpretation of it without taking anything away from the original.

You have collaborated with many artists in the past. In addition to Zero 7, you have worked with Robin Guthrie (Cocteau Twins) and Groove Armada. Do you have any other collaborations in the works? Is there anyone in particular whom you would like to work with in the future?

I have been lucky to work with such incredible people, but I do feel that we choose a lot of our path or at least have a choice of what we gravitate towards — we are given many opportunities to move forward despite our personal experiences which can be very painful and if we have the courage to go through the pain barrier then life rewards you in the most extraordinary way. I would love to work with Peter Gabriel and Damon Alban and hopefully one day I will.

You visited Kenya this past summer to raise money for the Rainbow Collections Children's Fund (RCCF) in order to rebuild a school in great disrepair. How did you become involved in the project and how was did the experience impact you? How can out readers contribute?

I have a collection of music for children that I re-created with my dear friend Kevin Kerrigan — nursery rhymes and lullabies — we had lots of friends with kids and all the CD's were terribly produced, yet the songs were beautiful and historical so we wanted to make a more honest collection with a few musical twists and through this project we then thought of doing an international collection — recording children lullabies and stories from around the world, reflecting the language that we could then musically surround making it easier for children to listen to other languages and music. We were given an opportunity to do an album with an incredible school in East Africa — we made the album — 20 hours of music edited in the most honest way into 30 minutes and the school was falling down- that propelled me into building a foundation and a fundraiser to raise money for this school in April 2009 — we raised over £30,000 and I have just been there in August 2012, and the Nursery, school educative centre is nearly finished. It has taken a while, but has been the most amazing experience seeing something grow from an idea and through passion and determination complete itself in the most pure way. This is how I see my album Seagull.

(To donate to the Children’s Fund): We no longer have a direct donation place unless they buy the Rainbow Collections albums on Amazon.

Sophie Barker and her band will be performing at The High Dive in Fremont on Saturday evening, along with Kimo Muraki & Tiny Messengers and Henry at War.