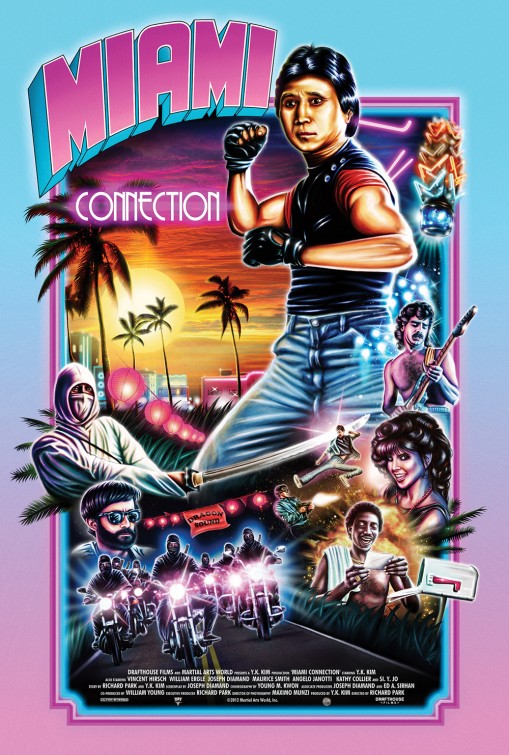 {Miami Connection can be seen at the Grand Illusion Cinema Friday and Saturday night at 11pm, and this coming Thursday at 8pm}

I'm not an really big fan of so bad it's good movies. But when I heard tale of Miami Connection the lost 1980s-made action flick featuring drug deals gone bad, motorcycle ninjas, and a musical band of crime fighting tae-kwon-do masters who belt out ridiculously catchy synth-rock ballads — I was at least a bit intrigued.

It turns out that Miami Connection is less a bad movie than a piece of joyously un-ironic filmmaking that wears it's wonderfully optimistic heart on it's sleeve. While introducing its audience to new levels of unintelligible story plot points, poor acting and stilted dialog. All worked in between insanely catchy yet horrible music that infects one brain with a grip more addictive than the film's "stupid cocaine."

The package works as a super entertaining unintended parody of a decade's genre action movies. As well as a triumph of artistic determination so pure that it overwhelms a myriad of execution flaws to make one want to give the filmmaker a hug for trying so hard. It's bad – but it's actually quite good.

Miami Connection jumps right into things opening with a stereotype filled drug deal gone bad due to the intervention of black-suited motorcycle ninjas. Wait? What!? Before your brain can register that it just watched a bunch of ninjas take out a series of heavily armed rejects from a Miami Vice, casting call things are moving on. Fast forward to an Orlando nightclub (yes, I know it's called Miami connection, but get used to saying whatever) where the band Dragon Sound is rocking the house. Blasting out their hits "Against the Ninja" and the bubble gum synth piece of musical crack "Friends for Ever" they ooze fun and friendship while Mark (director Y.K. Kim) throws around a bunch of kicks onstage. Sporting red muscle tees with the sort of iron-on transfer letters that went out with Spencer's Gifts, the band owns their own style in a less than ageless way.

Eventually we learn the female band member is dating one of the other musicians. Her brother is a thug mixed up in the cocaine trade, and is a brother of the head ninja – or something like that. Honestly it's pretty confusing at times. Kim's ability to throw in completely random story arcs that point to hours of cut footage don't help in things making sense. But that's sort of part of the WTF fun. Point being – eventually shit goes bad – and the boys in the band need to start taking out the town's trash.

Technically for what I understand as a first film things actually look reasonably good. Special effects are a bit subpar – but it's in more subtle ways that things really go south. For example, almost every scene goes on several paces too long. To the point of becoming delightfully creepy. Action scenes are the type where you can't help but notice the choreography slow down to ensure people are in just the right spot to get hit, or deflect a blow. Sort of like what would happen if you were screwing around with friends in junior high school making such an effort. At least assuming you spent the better part of your parent's life savings on such a production – and you actually knew Tae-Kwon-Do.

Watching the film makes one suspect the director Kim is a nice guy. Before seeing the film I watched him interact a bit with folks at Fantastic Fest where Drafthouse films hyped the heck out of this lost gem – further making me feel there might not be an ironic bone in his ass-kicking body. There's a raw earnest that comes through the filmmaking that makes you like the folks involved matter how groan worthy the material is. From the lyrics of the soundtrack, themes of brotherhood  to the final text that "only through the elimination of violence can we achieve world piece" – the crazy violent mayhem seems to come from an good place. And frankly if I'd tried to make a grindhouse film in 1987, it would have looked way worse. While being nowhere as entertaining.

Miami Connection really deserves to be seen in a communal space. Head down to the Grand Illusion and take part. Bring a few friends and perhaps have a beer or two along the way. I doubt you'll be disappointed. If nothing else I can guarantee you'll be humming Against the Ninja on the way home. And omg – wait until master Kim grabs a guy's nose with his toes as part of a Tae Kwon Do takedown. Seriously. Bottom line – don't miss this one. The beach side frolic montage, cheesy mustaches and your confusion as to the source of the missing father who may or may not reappear in the end are all together worth the price of admission even without the rest of the picture.

But you get so much more than just those magical moments…