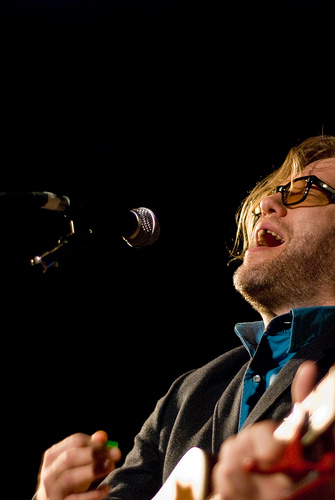 Thanks to a tweet from a fellow I met on the Long Winters messageboard quite some time ago (hello, internets!) I found myself pressed up against the stage of a 750-person capacity club last weekend, camera in hand. It was Saturday night, and Bimbo’s 365 was proudly hosting the San Francisco installment of the six-date “One Fast Move or I’m Gone” tour, celebrating the release of the album and documentary of the same name, the former a collaborative project between Jay Farrar, Ben Gibbard, and a love of all things Big Sur.

Opening up the night (as well as the rest of the dates on the tour) was Seattle’s own John Roderick, beardless, con haircut. Between quips at bloggers, shameless book promotion, and an unfortunate break of his glasses mid-song, he proceeded to slay the crowd with the following set:

And by “slay” I mean he completely and utterly brought it to the table, in a huge way. Aside from the pitcher of TheraFlu, you would have never known he was nursing a touch of a cold — hitting every note, solidly churning out song after song, amicable and funny and calling for requests.

After the precise forty minute set and a twenty minute changeover, Jay Farrar, Ben Gibbard, Nick Harmer, and a wicked steel guitar player and percussionist took the stage. The set was tremendous, however I was a bit disappointed to learn that it was a fully electric show, start to finish. While perfect for showcasing the alt.country, pinch-of-twang root nature of the songs (much more Son Volt than DCfC, by far) the volume had a tendency to leave the meandering throw-your-heart-out-the-window lyrics just a bit overshadowed… but to be fair, that also could have been a side effect of being lodged four inches from the monitors in the front row. Regardless, the full frontal guitar sound-wall that ensued more than made up for it for the duration of the ninety minute performance, and the lyrics that did filter in on some of the quieter numbers (most notably “Couches and Alleys”) were nothing short of stellar.

{Be sure to check out the whole set of shots from this killer show in the imaginary flickr pool!}