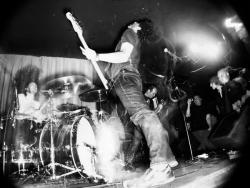 The Akimbo/ Blood Brothers/ Pretty Girls Make Graves show was a lesson in mathematics: the tricky equations of getting down and rocking out. The University of Washington HUB had transformed one of their dining areas into a surprisingly functional venue, and the concert completely sold out earlier that day. This was evidenced by the terrific line I waited in anxiously, not wanting to miss any action.

Akimbo was up first, and I was amongst the majority in that I had a terrible seat, and could see nothing. I scavenged around for the highest/closest/most convenient place to sit or stand or swing from, but no such luck. Eventually I found an area where I could see the occasional flip of the singer's tight curls, and the occasional flailing guitar neck. I decided to take the zen approach and focus in on the audio — I was not disappointed.

Don't you love it when opening bands set the tone? Akimbo rocked like an adrenaline shot to the heart, with breakdowns the likes of which I haven't seen since Farrah Fawcett was on Letterman. These professors of math rock kept things interesting, and their set was like a tightly wound punch. When they introduced their last song, "I am a Fucking Ice Giant" I was ready for a tour-de-force. And indeed, the lengthy number gave me guitar solos I could crunch, and made me feel like my footsteps could collapse mountains. I think the Hulk would be a fan of Akimbo. That's some wicked shredding.

After Akimbo's energizing set there passed the length of an aria, while the Blood Brother army gathered as close to the stage as possible, and tension mounted. When The Brothers finally took to the stage and swung into "Cecilia and the Silhouette Saloon" the crowd burst, or imploded, depending on where you were standing. The energy was thick and I wanted to rock out, if only I could move… I went with the wildly crushing flow, side to side, backwards and was then slingshot to the very front, where the fans were actually standing on the stage. Somehow I sidled to my right and wound up standing next to photographers from who-knows-what publication, standing awkward and astonished at my incredibly fortunate view: it was like the Brothers were jamming in my basement.

Standing behind the speakers meant I sacrificed much of the sonic quality of the experience, but it was more than worthwhile to see the Brothers' overwhelmingly energetic performance so close. The surge of people was consistently stepping on the Brothers' toes (Bros Toes?), pushing them up to the ceiling and shoving their amps helter skelter across the floor. Ah, I thought, but this is a rock show! Chaos is welcome! Madness abounded! The crowd sang along like it was Dashboard Confessing, reaching a fever pitch with "USA Nails." The Brothers' explained that this was the last show in Seattle for a long while, and that once they played here again they expected to have an entirely new arsenal of music with which to rock you, the ever-hungry rock fan. They retired the stage after an admirably long and rigorous set, leaving the crowd a sweaty, frenzied, adoring mess.

I spoke with guitar player Cody after their set, and he told me he'd had a really great time playing, despite the occasional fan being launched into his face. He also told me that the most exciting thing about being in the band right now was making their new album, which, he estimated, would hopefully be out around springtime. Later on, however, he confessed to not having a favorite Spice Girl — "I just don't know any of them…" I told him it was alright. He's a rock star; he doesn't need any more spice.

Once Pretty Girls Make Graves was finely tuned and ready to go the mob had somewhat depleted, but those who stuck around were treated to some lovely fist-pumping jams of the grrl persuasion. Yet again I found myself occasionally leaning up into tip-toe position just to catch a glimpse of any — please any! — movement onstage. After all was said and done I was exhausted. The turtleneck I had thought so chic and functional on the walk over was now stretched and wet with sweat I was almost certain wasn't mine. But I walked home with my brand new Blood Brother's T-shirt and the knowledge that yes, Virginia. Rock is alive. And it's living its day today in Seattle.