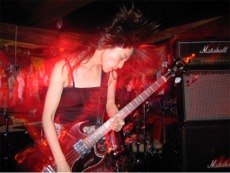 Mono, with The Swords Project and Serene

News flash: I love instrumental guitar rock. Love it. Seriously. So I took it as a personal affront from God when I found out that Japan's Mono and Seattle's Kinski were playing in the same town on the same night at different venues. Bound and determined to beat the Lord at this sick game, my Trusty Photographer Sean and I decided that we would attend both shows. Everyone thought we were crazy, but we knew better. Our whole lives had been leading up to this.

To ensure that there were no late night surprises, Trusty Photographer Sean and I headed the Sunset early to get stamps. While we were there, we got a chance to hear a bit of local band Serene. I didn't stick around long enough to articulate an interesting opinion, but I liked them. I liked them a lot. I decided that I would very much like to see them. But this was not the time.

This was Kinski time, so TPS and I made the veritable trek to Graceland and walked in just as the band was taking the stage. It seems, however, that the Creator had more tricks up his sleeve; TPS's temporary ID was refused at the door and we were turned away. Had we run like the proverbial dickens, we just might have gotten to his apartment and back to the Graceland just in time to catch the final charge of Kinski. But now we knew better than to test God, so we resigned ourselves to a quiet evening alone with Mono and headed back to sunny Ballard.

Since we got back to the Sunset so early, we got to check out Portland's The Swords Project, who reminded me of just how much I hate Juno, inspiring feelings that I would prefer to keep repressed…

…Mono took the stage without fanfare, and started plucking slowly away at the notes of what would be the first of many songs to start out quietly, grow increasingly intense, and eventually explode in a thunderous crescendo, closing with washes of feedback and reverb that are liable to suffocate band and audience alike.

Pulsing and pounding and throbbing and screeching and all sorts of other gerunds that imply hurting — my good friend Johnny C. Mellencamp would say it hurts so good — the distortion is so powerful that it eventually overtakes our very consciousness, and the crowd, instead of thrashing about, begins to sway back and forth to the larger rhythm containing the music as a whole. And once Mono achieves such captivation, they tighten their grip and elevate the music to fewer parts soft, more parts loud. By the time they reach the climax of "com(?)," their final song, my vision has blurred and I am light-headed and weak in the knees. Six minutes into their final catastrophic onslaught, the ringing in my ears is actually louder than they are.

If this is what God had intended when he worked so hard to keep me at the Mono show, then I am prepared to accept my fate. He has asked me to deliver this message to all of you: Mono is trying to kill you. Is your soul prepared?