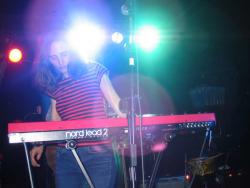 The Rapture, with Beans and Out Hud

The last time Out Hud came to town I didn't see them, and my friends have not let me forget it ever since. So I vowed that nothing could keep me away the next time they graced our fair city. Because the world's current favorite band The Rapture was headlining the show, I arrived early to prevent something as petty as a sellout keeping me from my destiny.

Opening act, Beans (from Anti-Pop Consortium) was probably fine and good, but I walked in just in time to see him put on his own album and rap over himself, which I always find absolutely inexcusable. So after half a song, I retreated to the bar to wait him out…

Fortunately, just as quickly and automatically as they took to the stage, Out Hud brought exactly the bootylicious sound that was promised, immediately cleansing my palette of Beans' offense. Mixing indie rock progression with hard-driving electronic beats, they produced danceable music that is still haunting. Maintaining unnaturally high energy throughout, they somehow forced a reaction from the crowd that I'm not sure I remember ever seeing in Seattle before: dancing. That's right; for every minute of the jarringly short 35-minute set, the entire main floor writhed and undulated and just let loose right along with Out Hud.

Searching for the secret of their success, I realized that what set them apart from a more traditional electronic band was that instead of using buttons for atmosphere, they used actual instruments. Driven almost entirely by the DJ and the bass guitar, Out Hud fills the stage with keyboards, guitars, and even a cello, all of which chime in from time to time (creating depths to the music best appreciated at home alone), but mainly serve to populate the stage with dancers that add to the live feel. To inspire the last four people standing still, one of the members even jumped off the stage and danced through the crowd, acting as Boogie Patrol, enthusiastically promoting ass-shaking . After the best workout of the year, I was in such a good mood (go endorphins!) that I was prepared to enjoy even The Rapture.

The only things I knew about New York's The Rapture before this show were that a) they are actually from San Francisco but moved to NYC so they could say they were from there, and that b) according to the show poster, the New York Times Magazine has hailed them as the "Sound of New York City Circa 2003." These two facts were nothing if not discouraging, so it took all of my strength to keep my itchy opinion finger from leading me right out the door to make up something bad about the band. Unfortunately, the following three things happened in rapid succession:

I believe firmly in the Three Strikes And You're Out approach to music appreciation, so at that point I had nothing left to gain. I took what was left of my Out Hud-induced high and danced all the way home.