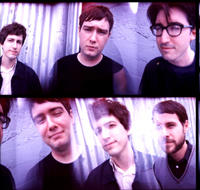 I don't yet understand the justification behind the cruel work of the gods that has prevented me from listening to the American Analog Set before this year. However, if once I was a sinner now I am found, for I recently got a copy of the Austin, TX, quintet's newest album, Promise of Love which is rapidly climbing my Top Ten Albums list for the year.

Full of lullabies and otherwise laid-back grooves, the album is a near-perfect reinterpretation of the idea of shoegazing. I say near-perfect because the one weak spot is the title track, which comes screaming out of the woodwork to clobber you. The abrasiveness of this song is unsettling at best; the fear it induces and what it may represent is the only thing standing between me and an unconditional love for all things American Analog Set.

As if the fates heard my tortured screams in the night, and felt compelled to make up for the cruelty of the gods, the band opened the show with "Promise of Love" played at HALF SPEED. As regular readers know I have a propensity to do, I nearly wet my pants 30 seconds into it. Suddenly all was right with the world; finally I could just close my eyes and allow the gentle melodies to lift me off the ground, out of the smoky club, and into the arms of St. American Analog Set, who rocked me gently into submission in the clouds high above, safe from all the dischord and agitation spawned by the other bands below. AmAnSet (as I understand their friends call them) play nothing but g-spot. Filling the space with sickly sweet tremolo-laced chords, drums brushed or tapped (never beaten), and the unequivocally soothing ping of the xylophone, AmAnSet don't necessarily care where a song is going, so long as it feels good getting there. And they never once rise above that glorious sedation, never hurrying, never harshing mellows, never accentuating a point. Everything they play becomes, during the moment they play it, the Best Song Ever, like a drug that works in four-minute spurts. And like a junkie, I have spent the weeks since the show scavenging for every album they have so that I can find just a few more moments of peace. They have become the soundtrack to my dreams, and it becomes harder to wake up each and every day.

Wanna come up to my room and see my American Analog Set? Write to me.