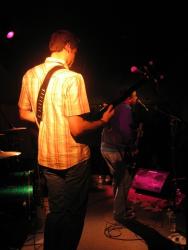 So Marlene and I headed to the Baltic Room to meet a few friends for a few glasses of wine. We got to the door, and lo and behold! It was a show! Seems the Imaginary Girls couldn't get away from their musical reviewing passions even for an evening. This particular show was a singer-showcase, and among the performers, John Roderick (Long Winters, Western State Hurricanes) and Jon Auer (Posies). Good heavens. We headed upstairs to enjoy some drinks before John (Roderick) took the stage.

But the lure of a new singer boy proved too strong, and I headed downstairs to hear singer #2, Aaron Sprinkle.

What's going on here tonight, I wondered? It's like Seattle's greatest open mic night. Who planned this?

Luckily, new Imaginary Girl friend Peter provided an answer of sort. Apparently, the event was organized by a cute girl in a cowboy hat named Michelle, for her birthday.

Now, you know how we Leos LOVE our birthdays. And you all read about my birthday exploits in last issue… I'm just saying I have a thing or two to learn from this Michelle. John Roderick and Jon Auer playing your birthday party? That is the shit. Strong work, Michelle, and Happy Birthday!!!

Wow. Aaron is a cute singer, too! He's a little guy with a big clear voice. And I could understand every single word (How novel at a live performance).

"You're much stronger than me, you know you are."

That's a nice lyric — descriptive of one who is strong enough to admit how vulnerable he has made himself, yet the admission itself is so much an overt showing of strength, it's a paradox (not the club, but the occurrence).

The music sounded much better downstairs, so I was glad I got up out of my seat. Aaron deserved to be much more than just background music for red wine and bar chats (though that part was pretty nice too…) So I dragged Imaginary Marlene down the stairs, away from her classmates and her cabernet, for a closer listen.

Aaron is like the very short and very cute boy next door.

Aaron Sprinkle is such a cute name. I think I should marry him, so that my name would be "Dana Sprinkle."

He gave a lovely, clear, strong and bold performance. Those are the words that come to mind: monosyllabic, no-nonsense modifiers for a straight-forward and direct show.

As with the other performers for the evening, Aaron performed solo, with only his guitar as accompaniment. Frank and earnest, he boldly faced the audience and belted his heart-felt lyrics, staring straight-ahead and slightly upward, as if seeing every word to some unseen ideal target.

Oh, poor little cutie pie Aaron! He's so earnest, belting his sincerity — only, he's so strong vocally that you know the power for that big voice is coming from a deeper place than your common belt can muster. His voice reminded me of a few other local crooner/belter musicians (A little bit Sean Nelson?), and was perhaps reminiscent of Matthew Sweet. Only neither of these quite described it; he has a voice that can only be described as Aaron Sprinkle. And that is a damn cute name.