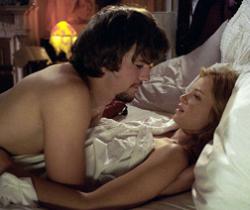 You want to see this film like you wanted to hear The Darkness last fall. It's a guilty pleasure, and you indulge and realize it's not so guilty after all. The Butterfly Effect is the story of Evan Treborn (played as a child, teen, and adult by Logan Lerman, John Patrick Amedori, and Ashton Kutcher), an unfortunate soul prone to blackouts. Once he gets to college, which in the film is filled with casual sex and nudity, he starts to read through his old journals and soon finds himself transported precisely to those early blackout periods — which coincidently mark major points in his formative years.

The film has an internal logic similar to that of Final Destination, and part of the fun is catching up with the swift changes and consequences Evan's time-tampering creates. Evan is played convincingly by Kutcher because he has facial hair to make you take him seriously. And as much as it would be easy to dismiss his acting, one could say this is the best movie of his career. Which isn't saying much, I know, but still Kutcher pulls off the presto change-o character reversals (let's just say he plays both a frat boy and a weepy paraplegic pretty well) throughout the movie.

Though the script feels as if it was written by two guys who grew up on movies (and more specifically, Back to the Future and 12 Monkeys) and never wandered outside, the acting is solid and the production is sharp. The set design perfectly conveys the constant changes in Evan's world through small, telling touches — like how a character's interest in building things turns into a major in architecture when his life is good, and an obsession over model airplanes when his life becomes shit. And the blackouts create a genuinely suspenseful editing device: there is at least a narrative justification for the jump cuts so recklessly used in recent cinema.

Though the linchpin for the plot is something as cheesy as Evan's love for his childhood sweetheart Kayleigh (Amy Smart), the film passes my expectations. Besides, we're in the official season for studio leftovers, when all the crap on the shelves is distributed. The Butterfly Effect is no Cold Mountain (or even Back to the Future, for that matter), but it's worthwhile.