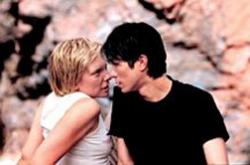 I love me some Toni Collette. Remember how she sparkled and glimmered in Muriel's Wedding? Or how she stole scene after scene from the bigger stars of bigger movies like The Hours and About a Boy? Or how she made otherwise-unworthy films like The Sixth Sense and Cosi and The Pallbearer almost worth seeing?

Her riveting performance in Japanese Story surpasses all those. She plays an ambitious Aussie geologist named Sandy who lives a rowdy, sardonic, self-sufficient life in a city I presume to be Perth. She knows a lot about the land (and it shows in her world's earthy art direction, with its rich browns and lovely blues)… but comparatively little about much else. She rolls her eyes at her mom's obituary scrapbook, flakes on friends when work demands get in the way, and asks a buddy to tell her about "the Japanese" when a taciturn Kyoto businessman named Hiromitsu (Gotaro Tsunashima) comes to town.

Arrogant lil' Hiromitsu, with his prim black suit and over-the-top fastidiousness, mistakes Sandy for his driver and treats her accordingly (despite a heavier dose of eye-rolling and sass on her part). Cultural misunderstandings all over the place.

With pressure from her boss to help strike up a business deal for her company, Sandy reluctantly agrees to take Hiromitsu around Western Australia's remote Pilbara desert. Journeying further and further into the unpopulated outback wilderness, the two are eventually thrust into a potentially life-or-death situation; amid the gorgeously vast spaciousness, angry friction softens into… well, not-so-angry friction. Maybe even romance. (This bit of the film is kinda like Gerry, plus some booty, minus the Waiting for Godot pretentiousness.)

After some of the hottest hetero-sex I've ever seen portrayed on film, there's a major shift in action and tone. Just know that the cultural misconceptions continue to play out for the remainder of the film, but in a more joltingly deep context. It's truly startling.

I'm still reeling from this abrupt transition, but Collette is a marvelous guide across Sandy's emotional landscape. In Japanese Story she reaches a new realm of the intense luminescence we've come to know and love, fierce and bright enough to burn a hole plumb through my imaginary heart.