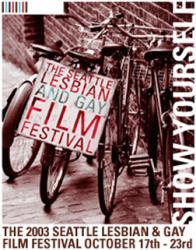 As is noted in the 2003 Lesbian and Gay Film Festival catalog, it's been a big year for the gays. We can legally make whoopee in all fifty states, we can get married on this continent (we love us some Canada), and we have a little show called Queer Eye for the Straight Guy that accomplished more positive-image results in its first five episodes than Will & Grace did in its first five seasons. We're here, we're queer, and whaddya know? People are getting used to it.

And following in Queer Eye's footsteps, the festival invites everyone to enjoy queer film at its best, even the straights! The late, great Katharine Hepburn can be seen in a new revival print of the 1935 film Sylvia Scarlett. Ghostlight pays homage to the late Martha Graham and includes an incredible cast including Ann Magnuson, Isaac Mizrahi, Deborah Harry, and former Seattlite Mark Morris. In true TIG fashion, three interactive programs (The Gong Show, Cine-oke, and the Singin' in the Rain sing-along) will allow audience members a chance at glory. (Or ridicule.) And if you don't get a kick out of opening night film Die Mommie Die!, there's little hope for you.

Don't You Worry, It Will Probably Pass. Intimate documentary about three bisexual Swedish teen girls coming to terms with… being bisexual Swedes, I suppose.

Gasoline. Another sexy Italian flick, this time about unlucky lesbian lovers dealing with an accidental matricide.

JIM IN BOLD. Loving tribute to late activist/artist/poet Jim Wheeler, whose hopeful legacy of acceptance and empowerment have left a prevailing impact on today's gay youth.

Put the Camera on Me. Hilarious and touching doc about a child auteur at the dawn of the video generation. Includes unbelievably funny video footage from now-adult Darren Stein's no-budget VHS mini-masterpieces from his early-'80s youth.

Twisted and Bent Shorts. I helped program this year's short films, and this wacked-out compilation is my favorite. If you're not easily offended, this shit (especially Buff…'n Muffin, Annie Dearest, and Wonderfluff Sandwiches) is wonderfully warped. But don't blame me for the over-the-top eye-roller Gaydar; for the record, it's the only one featured in this set that I (unsuccessfully) vetoed.