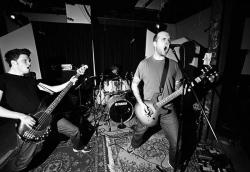 When I set out to see Playing Enemy, it was because I found out at 10:15 p.m. that the Sparta show over at Graceland was all ages and so was just coming to a close as I sat in my apartment tying my shoes. Disgruntled and determined to bang my head (at least on the inside), I turned to the nearest concert calendar to find an alternative. As luck would have it, Ballard's own Playing Enemy was set to take the stage at Chop Suey in just over a drive to the hill and a Rock & Roll Beer (that's a Rolling Rock, for any new readers out there).

This was my first time at Chop Suey (shhhh! Don't tell anyone, or my indie-cred will go straight down the toilet), so upon walking in the door, I was immediately excited to see that the More Punk Than You Breakroom had given way to a classier joint with twice as much seating and infinitely more oxygen. My childlike joy was only slightly infringed upon when I discovered that they do not serve Rock & Roll Beer, but fortunately I was able to execute my back-up plan, and soon settled down with a tasty micro to experience the last few moments of openers Stagger Lee. They sounded pretty much like Lynyrd Skynyrd, and I don't like Lynyrd Skynyrd, so I tried to ignore them, and will leave their review to someone more capable.

When Playing Enemy took the stage, I could immediately tell that they were going to thrashard, because they all looked normal — short hair, plain clothes, smiles on their faces. After a brief inside joke of an introduction (which I did not get, so don't ask me about it), they launched into what would consume my entire being for the next 45 minutes. Assault is what it was, really. Aural assault.

I've heard that the visual focus of the band is on the psychotic stage antics of bassist Shane Mehling, and it seems that what I've heard was true. During the balls-to-the-wall wailing (which comprised most of the set), he would sway back and forth at the very front of the stage, swinging the neck of his gargantuan bass out over the crowd, often appearing as if he were trying to smash it into the head of the guy who was headbanging in his personal Thrash Space. And then the vocals would set in, and therein I found what I consider to be the true magic of Playing Enemy. As is the case with most hardcore metal bands, the vocals were unintelligible, all being shrieked at the top of frontman Demian Johnston's lungs; but what I found truly endearing is that Shane knew all the words, and would shout right along with him. During the few instrumental lulls that occurred, his shouts could actually be heard along with Demian's, even though he was six feet from the nearest amplifying agent. Now that's heart. So if you like anything noisy, anything at all, go see this band! And stand back a few feet, would ya?

The headliners were called something. Swarming Hordes, that's it. They sounded like Iron Maiden, only without the exacerbating vocals. But Iron Maiden nonetheless. So again, someone else can tell you about them, because I had to leave.