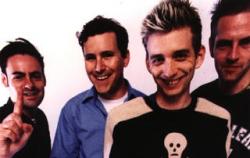 I love nights that start on a whim. A last minute plan for dinner out on a Friday evening resulted in catching a show that I cannot believe I almost didn't attend.

Although The Constantines and Roy opened up, I didn't find myself captured by the music until the The Weakerthans started their set. They were the headliners of this three-Canadian-band line-up. As soon as their set started I immediately jumped forward to catch a better glimpse of the band whose sound was incredibly pleasurable to my ears. The sound included an interesting and graceful voice that exuded warmth and sincerity, and two distinct but complementary guitars. Throughout the set they swapped parts or played melodies that wrapped around eath other.

As a fellow newly-Weakerthans-convert noted, "The second guitarist played his guitar like a Gibson should be played. He made it growl." Like him, I realized I would be purchasing their CD within the set's first few songs. I wanted to keep the feelings of serenity and good humor that the music lent.

The crowd obviously had been looking forward to the show, though only good fortune led me there. They knew the words and sang along. The crowd didn't drown out the vocalist. They were there to hear the band they most likely had been listening to for awhile. There wasn't much dancing (though I and a few others couldn't keep from moving). There were a lot of smiles… and since it was an all ages show there were a lot of sober happy faces. Little talk. A lot of enjoyment.

I decided to purchase Left and Leaving, an album from 2000. I relied on the advice of Ryan Schierling (TIG Photographer Extraordinaire), who originally recommended the show. Listening to the album, I was struck by the lyrics. They're displayed in paragraph form rather than in lines. Reading through them I found they are more similar to small stories or vingettes than poetry. The songs are intelligently put together and startingly funny, despite a tone of sadness thanks to the uplifting guitar and the heartfelt and hopeful voice.