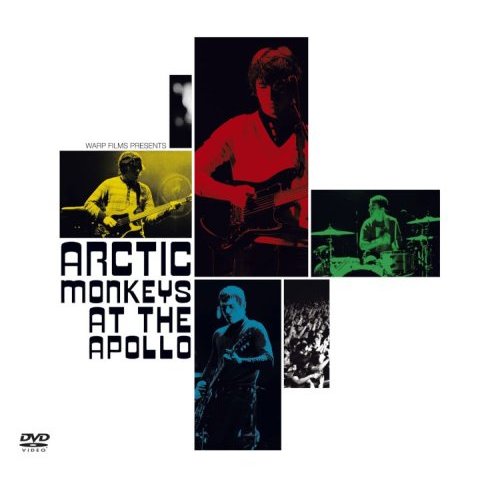 Oh the raw britpop vim and vigor of the Arctic Monkeys! Now we can watch the quartet take the Apollo stage (repeatedly) and get a bonus live CD (only available on the US version of the release – take that limeys!) with the release of the appropriately named DVD/CD set Arctic Monkeys at the Apollo.

You want to arm wrestle me for a copy? To enter the drawing, e-mail us at tig at threeimaginarygirls.com with the subject line "WrestleForMonkeys" before 9a on Friday, June 5th (no arm wrestling required).

Here's the tracklisting and full skinny:

The 76-minute film documents the last performance of the band's acclaimed 2007 world tour, which was at the venerable Manchester Apollo Theatre. Captured on super 16mm film, 'Arctic Monkeys at The Apollo' is a cinematic feast with impressive, intuitive and confidently held master shots – a film that invites the audience to immerse themselves in the style and force of the British phenoms as they deliver an energetic and impressive live performance in front of thousands of ecstatic fans. Directed by regular Warp Films music video director Richard Ayoade, captured exquisitely on film by director of photography Danny Cohen (This is England), edited by Nick Fenton (Sigur Ros documentary Heima), and produced by Diarmid Scrimshaw, this is the first ever live Arctic Monkeys performance captured on film.

Tracklisting for the film is as follows:

Tracklisting for the US-only bonus CD, which was recorded live in Austin, Texas, is as follows:

1. Riot Van
2. The View From the Afternoon
3. Still Take You Home
4. You Probably Couldn't See For The Lights But You Were Staring Straight at Me
5. Cigarette Smoker Fiona
6. Perhaps Vampires Is A Bit Strong But…
7. Dancing Shoes
8. I Bet You Look Good On the Dancefloor
9. When The Sun Goes Down
10. A Certain Romance