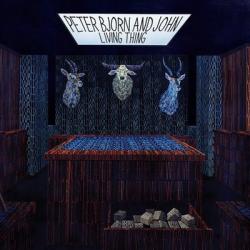 A word of caution for anyone looking for “Young Folks” pt. 2: you won’t find it here. With Living Thing, Swedish rockers Peter Bjorn & John are playing a whole new ballgame — trading in the tightly wound, guitar-based indie rock of 2006’s Writer’s Block for minimalistic tunes heavy on the electro dance beats, synthesizers, and with plenty of open space for the sound to run around.

And unlike with Writer’s Block, the best songs on the album are hidden in pockets of 2 or 3 at a time, rather than a clear slew of songs you can listen to straight through without pressing the Forward button. Skipping over album opener “The Feeling,” which is more filler than anything, it’s best to just pretend that things begin with #2 — the high energy, danceable “It Don’t Move Me.” The beat draws you right into its synthesized arms, and the way the drums and keys play off each other is a decent preview of the sparse feeling that can be found in the rest of the album. Then comes the cool, 5-minute love song “Just The Past,” which trots along slowly and lazily and works as a balanced backdrop for Peter to sing his measured lines of unrequited love: “tell me, how do I get to know you?/you untie me as if I were a shoelace.”

After “Just The Past,” there’s a block of 4 songs that I always skip over, including first single “Nothing To Worry About.” The choir of kids singing the chorus is a nice touch, but the song gets repetitive quickly and pales in comparison to the album’s second single, “Lay It Down.” The problem of repetition stays with “I’m Losing My Mind,” “Living Thing,” and “I Want You!,” none of which I was able to sit through more than a couple times because they just don’t seem to go anywhere in their 3 1/2 – 4 minute lifespans.

Luckily things start to look up with the aforementioned “Lay It Down.” This is one of PB&J’s best, the album’s standout track, and with the right amount of publicity, destined to become one of the top indie singles of 2009. The premise is simple enough — an ode to drunken douchebags in the club who like to guzzle beer and hit on your girlfriend — but the delivery is perfect. Fans of uber-erudite lyrics might shy away from this one, but the rest of us can just bask in the singalong chorus of “hey, shut the fuck up, boy/you are starting to piss me off/take your hands off that girl/you have already had enough.” Here, the old melancholy urgency that was found in songs like “Objects Of My Affection” and “Up Against The Wall” is back again, and the verse-chorus-verse format is hardly noticeable.

After getting riled up for a barroom brawl, the band settles down for best-song-runner-up, “Stay This Way.” It’s 4 minutes of deciding to be happy with stagnation, not really wanting to move forward or even go back to the way things were. The music apes the idea of the lyrics like an endless carousel, with various instruments sinking in and out of the picture to mimic the vocal melody — but it’s more a moment of introspection and “psychoanalysis of yourself,” as Peter puts it at one point, and the song stays very far away from becoming trite and repetitive.

The album starts to wind down with “Blue Period Picasso,” with lyrics sung from the point of view of a painting hoping to get stolen from the museum, a metaphor for wanting Mr. or Ms. Right to come sweep you off your feet and save you from yourself. I usually skip over the final two songs — “4 Out Of 5” (for some reason it always reminds me of The Velvet Underground’s “Venus In Furs”) and “Last Night,” but they’re worth an initial listen if you’re curious.

Living Thing is an entirely different undertaking for PB&J, and it’s admirable that they changed their approach so much when most fans were probably just waiting to whistle along with “Young Folks” v2.0. It definitely takes repeat listens and a little bit of digging to find the nuggets, but you’ll find yourself coming back to at least a few of the songs, and appreciating those ones that much more.