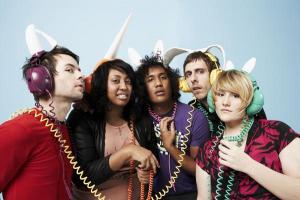 When I met Black Kids’ frontman and guitarist Reggie Youngblood for an interview at Neumo’s before the band’s recent show with Mates of State, he told me that TIG was one of the first websites to write about his band, following their much buzzed-about set at the Athens Popfest in 2007. I had no idea until he mentioned that. Since then, Black Kids have been one of the most talked about pop bands, generating considerable attention from their ridiculously catchy four-song EP, Wizard of Ahhhs. The Gainesville, FL pop band has had a rollercoaster tenure since then, but released their debut LP, Partie Traumatic last year on Columbia Records.

I talked with Youngblood about the sudden success of Black Kids, working on the next record and the band’s history. I found him very funny, candid and friendly.

You’ve been playing the same songs from Partie Traumatic consistently since 2007. Are you working on a follow-up?

We haven’t stepped in a studio yet but we’re collecting scraps and bits here and there, recording when we can on our computers.

Do you have any songs finished yet?

One song is almost finished. We’ve been playing it on this tour to get a feel for how it works. It’s called “UFO Cool”. God knows how what it’s going to sound like once we’re done recording it. It’s good to play it out live to see what works and what doesn’t.

Some of the songs I really liked on your album are really self-deprecating, like “I’m Not Going to Teach Your Boyfriend How to Dance With You” and “I’ve Underestimated My Charm (Again)”. Are they autobiographical?

They are in a sense. Some of the situations are a bit more outlandish than I’m used to but the basic vibe on the album is stuff that I’ve experienced – and most people have experienced. The voices in each of the songs have me playing different personas, like the victim (which, I have to admit, eighty percent of the songs I’ve written are from that perspective). I also wanted to try this callous, brash, womanizing voice as well. It’s fun to mix it up.

On “I’m Not Going to Teach Your Boyfriend How to Dance With You” you also play around with gender.

That’s also something I’m drawn to, but only because I’m a fan of (David) Bowie or Morrissey. It has always struck me when Morrissey said “I’m a girl and you’re a boy; you’re a girl and I’m a boy”. I’ve always made a note about it because people either really like it or they get really hung up about it – it really aggravates them. I do get some pleasure from it when people enjoy the song but there’s a little bit of homophobia within them. It makes the song a bit skewed.

You just mentioned Morrissey and I have sensed a little bit of his influence on your record. Were you a fan of The Smiths?

Definitely, I discovered Morrissey before The Smiths. I was a sophomore in high school when “The More You Ignore Me, the Closer I Get” was released as a single. My first reaction was to mock and mimic it but while mimicking it, I realized I liked it a lot – and through him I discovered The Smiths. That was when I discovered that simple pop songs can be really complex. It might have this jangly, upbeat music but there are morose lyrics – and within those morose lyrics there’s a lot of humor, as well. That opened up a new world for me and then with groups like Divine Comedy and Cinerama and Magnetic Fields made me realize what you can do with a song.

How was the band formed? How did you find everyone?

Us boys (including the rhythm section of Owen Holmes and Kevin Snow) have been playing in groups for over a decade. It was a very conservative area in Jacksonville, Florida so we actually started out playing Christian rock, which really isn’t that uncommon for where we’re from. We did that for a while but started drifting away from that and started playing in bars, actually the same two bars over and over again. Eventually each band would disintegrate.

My sister Ali, who is five years my junior, started running in the same circles as we did and I realized she was quite talented, so I wanted to start a band with her. We asked her to play with us but it was conditional: she insisted her best friend Dawn (Watley) join as well.

When you played CMJ in 2007, you had gotten a lot of attention as the hot buzz band that year. Was that beyond your expectation?

Oh definitely. I kept describing it as unreasonable; completely out of hand. We thought it would be fun but we were so green that I really didn’t have much fun. It was good and bad to play under that scrutiny. It was good that we got to gauge where we should have been. We had been fine up until that point, having a carefree attitude and enjoying ourselves. It was odd to go to CMJ with all of those strange expectations. People were expecting a really professional band – which we were not.

Was that something you had in mind when you recorded Partie Traumatic?

I think it was just exciting for us because it was the first time making a real record. For ten years we were making little demos on 4-tracks or computers. It was the first time in a real studio with a real producer, so we thought “let’s just make a real album.” We just wanted that experience.

Do you have plans for when you finish up this tour with Mates of State?

Probably just to relax and live in our filth (laughs). I don’t know. I was hoping being on the road – obviously, you’ve got nothing but time on your hands – I had this fantasy of us just shitting out wonderful songs during sound check or being on the bus and coming up with reams of lyrics, but unfortunately that doesn’t happen. It sounds backwards, but I want to go home and turn my brain off and lounge around. That’s typically when I get ideas.

You put your songs from your EP, Wizard of Ahhhs up on your MySpace page and made them available to download for free. Did that play a role in Black Kids being discovered?

We get asked a lot about the Internet quite a bit and what role it played in “our rise” but those songs were on MySpace for some time and no one really paid any mind. It took the physical act of going somewhere and playing those songs to bring attention to the songs on MySpace. It was still very organic, in that sense.