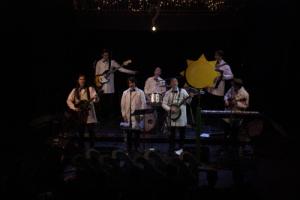 To mark the night, we set up the bands on the evening's bill on a date of sorts so that we can get to know a bit about those participating. In this imaginary interview installment, BOAT interviewed "Awesome" — let's see how the band with the least headcount on the bill took on septet "Awesome" (with "Awesome"ites Basil Harris, David Nixon, John Ackermann, and John Osebold doing the answering duties).

BOAT: The Latin word for seven is septum. September was the seventh month of the year until 153 BC, when the Roman Emperor moved September to its current position as the ninth month of the year. In it’s current lineup, "Awesome" is a septet- a seven piece musical group. Suppose Silvio Berluscone, the current Italian Prime Minister, mandated the addition of two musicians to the band, making the band a nontet. Which two famous musicians, living or dead, would you choose to add to the band? Why?

Basil Harris: I dated a woman in college with a deviated septum. Her nose was kind of big – not unattractive, but she always caught shit for it in high school – and when she went in to have surgery to correct her breathing, they asked her if she wanted some "cosmetic alteration" while they were in there. She said no, which I always thought was a pro move. Fuck those bastards and their small-nosed definitions of beauty. She looked a little like Jennifer Aniston, who I also think has a larger than "normal" (whatever that means) but completely proportional and distinctive nose.

John Ackermann: I think the first use of an eyeflute on a rock 'n' roll record was the immortal Buddy Holly in the song "That'll Be The Day (Ow, My Eye)". So, yeah, him and Michael Bolton.

John Osebold: (1) the dude who always stood on stage with James Brown and did secondary vocals like "get on up"; (2) Frostie.

Basil Harris: Do you think it was her hair that really did it? That's what "tresses" means, right? Hair? If it means something else, I really can't address the question, but if you mean hair, you should just say "nice hair". In any case, I'm no fashion scientist, but I'd credit her fortuitous casting on "Friends" and her unlikely ability to perform with an ensemble cast on a TV sitcom for her pop culture immortality. Unfortunately for all of us, he career, like many of those in the cast of that show, has stalled since the show's demise.

David Nixon: I didn't know what 'tresses' were either. I thought it was a typo and you meant to say "famou stresses". So I looked up 'famou" and found this:

I think they're a band from Guinea. Was Aniston in the band for a while? So we're really asking which member of "Awesome" is most likely to achieve pop culture immortality thanks to the stress of being in a band. Wow, that could be any of us. I'm gonna go with Kirk though.

John Ackermann: Well, if Aniston wasn't in the band, she was certainly their driving creative force. I'm pretty sure she wrote all the songs from bed while they toured, like Brian Wilson. But I have to disagree with David about his choice of Kirk. Just wait until you see the live rabbit suit Evan's unveiling for the Croc show.

Basil Harris: Except for that dude who played Joey. I thought his spinoff show was okay.

David Nixon: I'm sort of anti-tuxedo nowadays, but IF you're going tuxedo, definitely have the stripe. Otherwise people will think you lost your tuxedo pants and tried to substitute some dark slacks. You don't want to be up there saying your vows and see the bridesmaids out of the corner of your eye whispering about how you might have lost your pants. That's distracting.

John Ackermann: I think I actually prefer the ones with horizontal stripes.

John Osebold: Stripe. without it, I can't tell which way the pants go.

BOAT: This is the third time Awesome and BOAT will share the stage on the same night. All three shows have been in Seattle. In what fictional city should "Awesome" and BOAT perform their fourth show together? Why?

Basil Harris: Plus his show had Adrianna from "The Sopranos" on it and she's pretty good-looking. Nice hair too.

David Nixon: Atlantis, obviously! It's an AWESOME city that you'd need a BOAT to visit! Hey wait, where's everybody going? Who turned my microphone off?

John Osebold: I did. we need the power to run the SLUT.

John Ackermann: Um, David, Atlantis was an ISLAND, not a CITY. Sheesh. As for me, the fictional city I'd love for us to play on would be the moon.

BOAT: Would you be willing to ever cover Supertramp?

Basil Harris: I always enjoy it when an actor can play drama and comedy. I think it shows real range and commitment to the craft. Some people think that dramatic acting is where the real "heavy lifting" takes place, but I disagree. If you can't do comedy, if you can't
sell a joke or a humorous moment, you're sunk. I mean, how hard is it to say something unfunny? Not hard at all. In fact, it's one of the easiest things in the world. People say unfunny things every day without even realizing it.

David Nixon: There's so many great Supertramp songs to do. Imagine us playing "Breakfast in America" from inside the belly of a giant squid.

John Ackermann: "Take a look at my mollusc / It's the biggest one I've got / An eight-tentacled mollusc / It always seems to ink a lot."

BOAT: How great is Supertramp? Feel free to elaborate.

Basil Harris: It is kind of sad, though, watching someone try to tell a joke they can't remember. You just want to tell it for them. Kind of like mercy killing or something. Mercy joke-telling, I guess that would be more accurate. Man, I hope I'm never in that position again.

John Ackermann: Actually, I really do love Supertramp. I think "Crime of The Century" is a great album. It's classic Pompous 70's Rock, in my opinion.