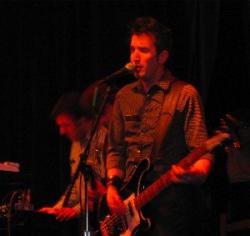 Local music brings the Crocodile back to life

"The Crocodile is alive again," I thought, as opening act The Globes pounded out rhythms like a heartbeat: BAH-BOOM, BAH-BOOM, BAH-BOOM. As drummer Marcus Ourada led the percussion into the first song of the night, the revived rock club on the corner of Second and Blanchard came to life once more with the sounds of great local music.

Joining Ourada on stage to round out the Globes were singer/guitarist Erik Walters, lead guitarist Kyle Musselwhite, and finally bassist/keyboarder Sean McCotter (who is also a bass teacher at the Paul Green School of Rock) Though the band debuted their self-titled EP in 2008, they have been playing together for years – and it shows through their cohesively tight style.

While Walters has pleasant vocals, there is a heavy emphasis on instruments and pure sound. The rock melodies are powerful and have the ability to swell to great heights. At one point a guitar solo leads into the drums of the next track for a perfect transition between songs. The keys are soft and barely audible, a noticeable contrast to the loud, full-force of the music. It's clear the Globes are one of Seattle's most promising young bands. After their set, an observant stranger to my right remarked to me that "they were epic!" and I agree.

Though the show had started with a modest crowd, when the following band Romance came on there was definitely a large audience for a Wednesday night. This band was older and had a stronger stage presence, though a bit more theatrical. They were the only act of the night to use black and white stage lights, and were sharply dressed with slicked-back hair in true gothic rock fashion. Reminiscent of post-punk revivalist's Interpol and the Strokes, who drew inspiration from earlier acts like Gang of Four and Joy Division, Romance played dark yet danceable music characterized by fast paced guitar riffs and toe-tapping beats. Lead vocalist/guitarist Drew Jackson and crew had great enthusiasm and the crowd generally enjoyed them.

Fresh from representing Seattle at SXSW, like Romance, rising local stars New Faces took the stage third. The teenage trio of singer/guitarist Nico Janssen, bassist Kyle Hove, and drummer Conor Sisk played upbeat, catchy pop tunes complete with hand claps and shouts. New Faces were the most lyrically dependent band of the night. With simple, subtle lines like "I don't want you / because you want me / you're too easy" their songs were both quick to remember and enjoy, and Janssen's low baritone gave their pop songs just enough of an edge.

Like the Globes, who won EMP's Sound Off! competition in 2007 under their former band name For Years Blue, these talented kids won last year. Shortly after, New Faces were signed to Loveless Records (and their debut record, Two Years, was the [surprising] winner of TIG's reader's poll for favorite northwest album for 2008). I believe their momentum has only just begun.

The final band of the night, Hotels, stepped out on stage wearing collared dress shirts and name tags – as if they were really supposed to be working the night shift behind the front desk of the a Best Western and decided it would be more fun to headline a rock show. Though Hotels share many of the same influences as the other bands of the night, they’re a bit more new wave – with plenty of reverbs, spacey synth sounds, and great hooks. At this time I decided to call it a night, but I hope to catch more of Hotels' set in the near future.

I left the show feeling rejuvenated. The two youngest bands of the night, New Faces and The Globes, give me great hope about the future of the Seattle music scene.