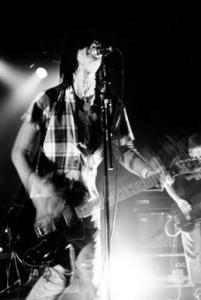 The Athens-based Southern rock band Dead Confederate has had a meteoric 2008, most of it before the release of their excellent debut record Wrecking Ball, which came out in September. The band is getting ready to go on tour across the country, including a stop here in Seattle on November 19, playing at Chop Suey with Apollo Sunshine and Feral Children.

Singer/guitarist Hardy Morris took my phone call to discuss his band’s dynamic, songwriting, influences and a certain Seattle radio station that may have played a small part in the band’s rapid success.

I first became aware of Dead Confederate when you played KEXP’s Christmas Yule show at the Showbox late last year. The station often has a knack for discovering and supporting relatively unknown bands. How did you find your way into their good graces?

Well, we had an EP and KEXP had gotten a copy of it and like it and added it to their rotation. Then last year we played CMJ and they asked us to do an in-studio show. We went in to their studio with Cheryl Waters, John Richards and everybody and Cheryl flipped out and loved the band. Later that afternoon, they asked us to play their show and offered to fly us out to Seattle to play it. We were like “hell yeah, of course we would”. Once they saw us play live in that that in-studio, they really seemed to dig us.

The song “The Rat” is a really fascinating song and seems to be a critique of Christianity, told from the perspective of a rodent. How did that song come to be?

That was actually written by our bass player, Brantley (Senn). Five songs on the record are mine and five are his. We split the songwriting duties in a lot of ways.

But “The Rat” is not pro-religion or anti-religion. It is about the judgment that gets passed by a lot of people that are uber-religious. Some of the tenets of Christianity is to not judge others and to help your brother in need but the uber-Christian people are the first to damn someone when they don’t even know who that person is or what they believe deep down. It’s hypocritical to the religion they hold so dear; just don’t use it as a tool to pass judgment on others.

One of the things that I really liked about Wrecking Ball is the sequencing of the songs. Each song seems to flow into the next one seamlessly. How did you settle on the track list, in that order?

There were things that we wanted to do like have “All the Angels” come after “Yer Circus” because we do that live a lot. But when it came down to it, we tried a lot of different sequences. That was what worked best. I liked having it heavy-hitting at the front (with “Heavy Petting” and “The Rat” first) and then have more spacing in the middle and then at the end have a long, slow song and then a longer, slow song. It ended with it being really sweeping and chill and then fades out.

We did it in Austin, TX with Mike McCarthy, who worked with Spoon and …And You Will Know Us by the Trail of Dead. He was a suggestion by our A&R guy. We had done some demos (which became the EP) and our A&R guy sent them to Mike and he loved them. So he mixed the EP and I thought it really sounded great. He kept in touch and kept prodding us along; he really wanted to do the record. There really was no reason not to do it with him.

So we flew out to Austin in late January/early February of this year and were in Trail of Dead’s practice space, this concrete room, and we recorded everything live. Some stuff we did in one take, some of it took a little longer. He put microphones everywhere and let us slam away. We got something really organic and raw.

Who were the influences that made you want to become a musician?

Neil Young was a big influence on me, in terms of songwriting, and on Brantley as well. We grew up big Neil fans and saw him in concert together when we were younger. The first record I ever had was Harvest. Walker (Howle, guitarist) and I, and I the rest of the band in general, were really in to Pink Floyd early on. I remember watching Live at Pompeii with everyone and we bonded over that. I really like some simple stuff but I like psychedelic stuff, too. And I really like the raw energy of Neil Young and Nirvana. Real shit, I guess. (laughs)

How did Dead Confederate evolve as a band?

We just wanted to play when we started. Then we got to the point where we took ourselves more seriously and got to writing. Brantley wrote “The Rat” and I wrote some stuff and realized “this is what you have to do to write a good fucking song!” I never thought of myself as being able to write anything like a good Pink Floyd song or a good Neil Young song – and not that we do or anything – but when Brantley played “The Rat” on an acoustic guitar for me, I thought “this is as good as a lot of the songs I hear.” It turned something in my head that said we need to be writing more and not just playing.

Was there ever any time along the way that you said “this is a song we might play on ‘Conan O’Brien’”?

(laughs) No. A lot of people ask us “’The Rat’ was NPR’s Song of the Day. Is there pressure to write another NPR Song of the Day? He just sat down and wrote a really good song. You can’t write something like that with those intentions or projections like that.

Maybe Max Martin could, but not too many more.

How did you learn to play guitar?

I was like 12 or 13 and my mom was an old-soul hippie and an artist. It’s really awesome, actually. She always had stuff lying around. She played violin and fiddle, mostly, but knew some guitar, too. She taught me “Heart of Gold” by Neil Young and I kept playing ever since. I just got wrapped up in it. It’s kind of pathetic, really. I feel like I’m doing the exact same thing since I was 14: jamming with my friends and going to shows. It’s awkward because I just turned 29 and sometimes I think “I’m not doing anything differently than I did back then. It’s also kind of nice.

Doesn’t the success you’ve have make that easier, though?

Yeah, it does make it a little easier. A few years ago I questioned it more. “What in the hell is going on?”