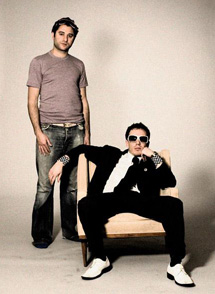 With amazingly intricate and genre-defying songs, Brooklyn-based duo Project Jenny, Project Jan have already put out two incredibly danceable releases ("EP" and "XOXOXOXOXO"). They stopped by Seattle on tour with Fugiya and Miyagi, preparing for their new release, “The Colors EP”, which features collaborations with the British electronica band, as well as others such as Mixel Pixel and So Percussion. A percentage proceeds from the upcoming EP, set to release on April 14, will be donated to the 826NY Organization (826 is the same organization that, in Seattle, is represented by the Greenwood Space Travel Supply Co.).Project Jenny, Project Jan will also be releasing a full length album later this year.

Vocalist Jeremy Haines met with me at the Pike Street Fish Fry (next to Neumo’s) before his Seattle show to discuss the band’s unique mix of styles, hidden talents and lengthy bus rides.

I first discovered Project Jenny Project Jan when I watched the video for “320” on TIG. After looking up all your other music videos I was completely in love. Your videos are all so funny and unique; how do the ideas for those get generated?

Yeah, Sammy is in charge of the videos, he does a really nice job of putting them together. We sometimes come up with the ideas together, but a lot of the time it’s just him. For instance with that one, it’s a song about paranoia, so I think he just googled “paranoia” and got some great footage of people in a mental institution back in the 30s, and then just made ‘em dance. Which is great. Sometimes we use stuff that I’ve shot, either on video or photos, but he puts them all together, and makes it really come to life. And we have visuals for our show, and so it becomes like a third member of the band. So it gives people something to look at and it all is all synched up, so it just makes it more fun. That’s what it’s all about.

Your songs all have such eclectic styles and use a huge variety of sounds. Do you start writing a song with a particular style in mind, or does that develop later?

Most of the time it just develops pretty organically. There are some, like with Dia de los Niño’s, I wanted to something in Spanish, so we did it like it was going to be a Spanish song, I think. It’s kind of old now so I kind of forget. And Dialogue, we were watching something with Indian music, and we were like “oh, let’s do an Indian song!” but most of the time we’ll be working on something and we’ll say “that needs a little of this flavor” that’ll either be a good contrast or it’ll help bring it all together. And then we’ll just do it right at the time.

You mentioned how you’ve had some Spanish influence and Indian influence, and a lot of your songs seem to have a distinct international flavor. Do you travel frequently?

Yeah, well that and, New York is completely multicultural, so we get a lot of inspiration just by living in the city and interacting with different people every day. You know I work with a guy from Vietnam; I work with a girl from Japan. And musically, we both are so open to different cultures’ music. Some of my favorite music is Spanish, like Afro-Cuban All Stars for instance. So we just don’t want to keep a closed mind about anything, especially music, so we’ll use anything. If it sounds good to us, we’ll put it in.

So, if you could build a huge fan base anywhere where would you like that to be?

I’ve always wanted to play in Japan. But China would be cool too, cause there’s more people there. That would be fun. I want to go over there too; I haven’t been over there ever so I’d like to check it out. I wouldn’t mind being huge in Russia, they’re pretty fun people usually. But that wouldn’t be my first choice; we’ll just say Asia. That covers a lot of places.

Something I love about your songs is how they seem to take a modern, electronic take on really classic genres. For instance, “Train Track” sounds like it could be a mid-20th century bebop song, but with a definite modern twist. What classic genres have had the greatest influence on your musical style?

Sammy played a lot of jazz in college; he’s a bass player by trade, that’s his instrument. So I think he is really influenced by jazz, and I have been very influenced by jazz as well. I like Jeff Baker a lot; as a singer, I mean he’s amazing. So I think we get most of our influence, classically, from jazz. Although we listen to a lot of different stuff. Sammy likes a lot of classical, like strings, and I do too. But I’d say our influences are probably mostly rooted in jazz and rock n roll.

You guys are known for your trademark cartoons, Jenny and Jan. What is the story behind these girls?

Well, it was a response to the name. People kept asking us, where’d you get that crazy name? And we were like, I don’t know! So we came up with them to say, “oh no, the name’s about them.” And we almost tried to make it like a, which came first, the chicken or the egg kind of thing. And now they’ve taken on lives of their own; they’ve got outfits and personalities. I want to do a Saturday morning cartoon someday; I think they would do well.

I think so too. They’ve got that mystique.

Oh yeah totally. They’d be like spies or whatever, it’d be great.

Are you an artist by trade?

I am. I went to art school; I got a BFA in printmaking. I do all the album art. I originally moved to New York to be an artist. I wanted to be a visual artist and show in galleries and shit. I put that on hold a little bit when we started the band, because… well first of all I wasn’t that happy about the community. It was tough for me. I was doing artist assistant stuff, and it wasn’t that fun. I got a little disillusioned. But I’ll go back to it, because I really love making stuff and drawing pictures.

Your song “Chinatown Bus” gives some pretty good advice [“’Ni hao ma’ is what you say when you get on the Chinatown bus/When you say ni hao ma they all look at you and smile /they will think you know Chinese but you will only know ni hao Ma /they will like you better than all the other white people on the bus”].Did you learn this from personal experience?

Yeah, yeah. I lost my license for a little while; not because of anything bad. I got stopped for speeding a bunch of times and I didn’t pay those fines; so it was really ‘revoked’, it wasn’t taken away. So I ended up taking the Chinatown Bus a LOT. It’s a bus that used to just go from Boston to New York, and it started out as one of those airport shuttles; that’s when I first started using it. It would pick you up from a store in Chinatown, in Boston, and drive you to Chinatown New York. Now it’s a whole operation, they go to multiple cities; and they have actual big busses now.

Your new song "Pins and Needles" is a collaboration with Fujiya and Miyagi; how has it been working and touring with them?

Jeremy told me afterwards, when I asked what HJIH (title of a great song off their full length album, XOXOXOXOXO) stands for, that he thinks people should just make up their own meanings for it.

One from a fan: Hand Jobs In the Hudson.

From one of their grandmothers (which, Jeremy said, she came up with instantly): How Jewy Is He?
My personal interpretation: Heroin Just Isn’t Healthy

What do you think HJIH means?