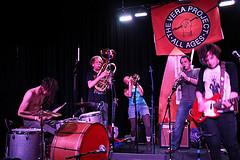 Nana Grizol and Music Tapes at the Vera Project

I showed up at the Vera Project to cover Music Tapes, having heard that the band featured former members of Neutral Milk Hotel. I'd never even heard of the support band, Nana Grizol, however there were many many Imaginaries in residence to let me know they'd be a band worth hearing. The Vera Project was a veritable Elephant 6 heaven for any fan that night.

As the Imaginaries predicted, I enjoyed the Nana Grizol show a lot more than I did Music Tapes. The whole band is exceedingly sweet and endearing and just played the hell out of their set, which was mostly just a multi-instrumental joy-fest. Lots of playful banter and charming confusion peppered their time onstage, along with a lot of big toothy grins. Maybe they were just high.

At any rate, they're an energetic and multi-talented bunch of people – and when I say "bunch" I mean "shitload": In addition to two drummers and the requisite guitars, they had two trumpet players, a baritone player, clarinets, tambourines, spoons and more. Vocals by Theo Hilton are wholehearted and earnest and pour out of him with gusto. He's got a funny little cracky, lispy voice and is a fantastic band leader, telling lots of inside jokes and cracking up the rest of the band. The whole ensemble together just seems like a really fun backyard party band who simply have a great time hanging out with one another. The Neutral Milk Hotel vibe on the horns was definitely there, but it didn't eclipse Nana Grizol as a band at all, which was good. Overall a very thoroughly enjoyable show. I bought their CD immediately. You should too.

Music Tapes…Ok, now that was weird, y'all. Having done a little research on Julian Koster since the show, it all makes a little more sense now, but I wasn't prepared for the surrealism of that experience, not one bit. It began with just solitary Julian playing a melancholy song on the banjo, but he was joined by most of Nana Grizol near the end, with Theo Hilton now on the drums. I'd never seen someone rock out so much on a banjo.

Shortly after, Julian introduced us to "two good friends" (which ended up being a saw and a television with a crooked little smiley face drawn on) and then proceeded to play the saw beautifully, what he's most known for. Koster reminds me of Crispin Glover with his odd quirks and eccentricities; the whole experience was kind of what you'd expect from George McFly. Childlike vocals came from the television "from outer space…the only singing television in the world". The song took a captivating turn, him still treating that banjo like he was in Nirvana and backed by a massive drums.

Finally we were introduced to the 7-foot metronome which had been adorning the stage all night, a friend who had "played across oceans, played for kings and queens". The song was great, with a marching band quality, well-placed cymbals and expressive horn.

The set continued in a sort of formula: most songs beginning with simple vocals and strummed banjo, then a rousing, crashing accompaniement by the backing band, then quieting again to just singular vocals and banjo, then rising again with horns, accordion, saw. At one point, the band left Julian alone on his hands and knees onstage to sing into the floor, then suddenly all ran back on to continue with a full-bodied performance. Koster even began sawing on his banjo with a violin bow, which I'd definitely never seen before.

Finally nearing the end, we were introduced to another friend as Julian brought his saw into the audience and invited us to all sit around him as he played "The First Noel" so perfectly I was breathless. It was totally amazing. I've only really ever seen saw players make analagous sounds and singular notes, but never play an actual, identifiable song. He apologized to us for his saw's desire to sing Christmas carols to us at this inappropriate time of year, but that the saw was unaware of time. He ended the song by having the saw bow to the audience.

And then stuff got really weird.

I had heard just prior to the show that Koster likes to play games with his audience but I wasn't expecting anything like this. He requested that the audience write down a memory and place it in a plastic camel. He then invited the entire audience to follow him outside into Seattle Center, where the memories were placed into a large pot and set aflame. Yes. One memory was read aloud before the fire, audience members jumped over the flames one by one. Another memory was read when the fire had gone out. Yes. Julian handed out various hand bells and called us all back into the Vera. As he played onstage, he encouraged us to only ring the bells he'd provided if something in the song reminded us of the specific memory we'd written down. Indeed, as he played, all around me bells began to ring. Yes.