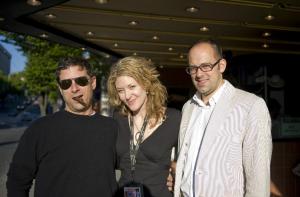 In documentary filmmaker Ondi Timoner’s latest film, We Live in Public, she profiles an internet mogul named Josh Harris, who founded several companies, including Jupiter and Pseudo.com, the latter was a broadcast network over the internet. Harris’ most ambitious projects, though, were creating an underground bunker where people lived in an artist community where all of the items they desired were provided, in exchange for their privacy because they were recorded 24/7 and a website called weliveinpublic.com, where he and his girlfriend lived their lives publicly and viewable on their website.

It is a riveting film that chronicles a fascinating character though the bubble and burst of the dot-com industry. She is also known for two other brilliant documentaries: Dig!, which profiled two rock bands, potentially on the verge of stardom, The Brian Jonestown Massacre and The Dandy Warhols; and Join Us, which profiles a Christian cult in South Carolina.

Ondi Timoner spoke with us about her films when she was in Seattle screening We Live in Public at the Seattle International Film Festival. I had to ask very few questions to get her to talk about her films and subjects. You can find more info online at weliveinpublicthemovie.com or by following Timoner on Twitter (http://twitter.com/onditimoner).

The two central characters in two of your films, Anton Newcombe, the lead singer of the Brian Jonestown Massacre, in Dig! and Josh Harris, the internet mogul, in We Live in Public, were often right about their big ideas. Josh, with his ideas about people online wanting immediate attention and Anton predicted that the next “big sound” in music would be garage rock. Josh’s vision was sort of passed by MySpace and Facebook and in Anton’s case, The Brian Jonestown Massacre was not the big band of their time, they were passed by The Strokes and The White Stripes.

The irony of both of them is that they should have been forefathers for their scene but they were footnotes until the films came along. I think to a large extent, that is why Josh is still in America. It’s so gratifying to him after all these years, after feeling like he was run out of Manhattan and ridiculed and forgotten to be called a visionary now. If you look at YouTube’s business plan or Justin.tv, you’re looking at Pseudo (the broadcast network Harris created to be air content over the internet). He called it. It’s kind of undeniable that on that basic level, but I don’t think MySpace or Facebook are up for acknowledging him. Facebook wants to have a screening of the film and they are paying attention. MySpace is talking about having a channel promoting the film but they really didn’t pay much attention to him when he was trying to do Operator 11 (his most recent business idea). That’s not something they found significant.

I think whether Josh is going to pull off his next idea, the wired city – even with the press he’s getting for this movie and having “called it”, it is sort of a double-edged sword. Yeah, he called it, but he’s also a walking cautionary tale of what not to do: taking large amounts of venture capitalists’ money and spending it on broadband. He knew that because he stated Jupiter (his first internet venture) that broadband wouldn’t come along until 2000 at the earliest but he didn’t care because he was more concerned with being first than having a valid business model. It’s all wonderful documentary material. That’s all I can say.

Would I finance his wired city? I don’t know but is this film the most relevant thing I’ve ever made? Yes. When I was hit with what this film is about, to make it socially relevant, I was hit with a very important calling: that I needed to have it done in time and have it done for Sundance 2009. It really was a tipping point where the virtual world was trumping the physical world more and more. Even in Kansas, it’s all Blackberries and iPhones and MySpace and Facebook, Friendster, Twitter – who just doubled their number of users, or Facebook who revised their terms and conditions that they own your content since the beginning of time three weeks after we showed the film at Sundance – but have since gone back in the closet on that. It’s all happening. To some extent, there is something I had no idea what to do with it but it found its time and it was up to me to translate it to the world. I had to trust my gut and be tenacious enough to stick through with them. This was a clearer vision than anything I had ever had before. I believe it is the zeitgeist film of the year and I’m just lucky I made it.

It had its own power to be born. It was made by an incredible team at a supernatural speed: 5,000 hours of footage in eight months of editing. If I didn’t have a clear vision, I wouldn’t have been able to navigate that material so fast, but it wanted to be born at that time.

Unfortunately, it’s also the worst economic time to put out a movie. I’ve had to be an entrepreneur for the past several months – not that I wasn’t before. It’s like the way the music business was three or four years ago: independent companies are folding and everyone is running scared; distributors are gone. It’s not even a good time to sell your movie, even if you could because the company that buys your film may be out of business in two months. I’m trying to link up with other visionaries who understand the power of the film and to get it out there in the right way.

You’ve also been using social media a lot to promote this. I knew I was going to do this interview so I began following you on Twitter a couple of weeks ago and we communicated a little bit through that channel and then you needed volunteers to help with filming and asked me to do it, but I couldn’t, so I put it to my friends on Facebook and a couple of my friends are helping you record audience reactions to the film at SIFF.

That was the first time we tried that. That’s good, though, right? We’ve never met before but have through the internet and you seemed interested in the work we were doing. If I wasn’t so busy with the work I was doing with distribution of the film, I could make another film about doing this.

This film has opened so many doors as to the inner workings of the world, where the movie leaves off. Suddenly I’m at a Netflix executive retreat or being invited by Microsoft or MySpace and it’s all happening right now.

Both Dig! and We Live in Public are about visionaries, but the film you made in between those two, Join Us is not. It’s about a creepy, religious cult in South Carolina. Why were you drawn to that story?

To me, the films aren’t about the visionaries so much as they are about the followers and what it is that we are willing to give up to have our lives matter. When (George W.) Bush won the election in 2004, I thought there might be some mind control in America. We went to the only accredited cult treatment center in the country, probably the world, where you can live there and be deprogrammed. We wanted to look at this phenomenon and see these families that left a church and realized it may be a cult. It was interesting because the eight definitions for what makes a cult are eight actual techniques that Dr. Robert J. Lifton identified in Prisoners of War in China and it could be applied against any destructive group and be defined as a cult if there are seven of the eight active; if not, it’s not. I learned all this and I learned that cult members showed up looking like us, driving SUVs and BMWs and their compound is a suburban subdivision they built that looks like the one next door to it. I realized how insidious the situation with cults is. < /p>

I had no idea it was an epidemic or that there are over five-thousand cults in American and they are more common here than anywhere else in the world – mostly because of the first amendment and authorities won’t intervene once you have a non-profit status.

There is also a disconnection in this country and people seek to connect to belong. It’s very similar to the internet crowd (in the bunker that Josh Harris built, which was profiled in We Live in Public). That’s the people in the bunker and they had no idea what they were getting in to. They know that’d have to wear uniforms and answer five-hundred questions and get interrogated but they would do whatever it took to get that attention and be a part of that community and have that camera. The stakes kept going up and there were more desperate attempts for the camera and the pecking order. It’s remarkable the parallels you can draw. I’m fascinated by what people give up.