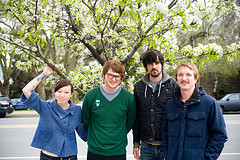 Telekinesis is back home in Seattle after extensive U.S. tours; in fact, they're live on KEXP as I type this. Last week, Telekinesis frontman Michael Benjamin Lerner and I spoke via email about record labels, tour sickness, favorite things, and what's next for the band.

SJMJ: Advance notice – you didn't have a record recorded yet when Chris Walla blogged about you on Stereogum. Did it feel like there was a lot of pressure for you +/or the album to live up to?

MBL: It's funny because I think there definitely was some pressure, but I felt so ready to make this record, that I almost had to forget about it. It was a mad dash to get everything in due order for the two weeks that Chris and I had to record, so it was a little pressure in that way. It felt a little rushed trying to get it all ready. But it was a good kind of rushed. I think that came through on the final product, and in the best possible way hopefully.

There was also already some interest from Columbia records, and they were putting a little bit of pressure on me before the recording process even began. That's definitely a weird feeling. Having interest from a label before recording the album was pretty foreign to me, but they were really incredibly cool about it, and let me do my thing as it was being made. They really gave me my space for that two weeks, and that was really helpful. It got crazy again like the day after I got out of the studio.

Also, I was actually quite nervous recording with Chris Walla, because he is, well, Chris Walla. So there was pressure there, but it was all erased the minute we started recording. Chris made me feel incredibly comfortable from the very beginning.

SJMJ: Signing with Merge – who were your favorite Merge artists? Was there something that told you this would be the best fit for your album?

MBL: There are so many. Spoon is one of those artists for me that I can listen to for days and days without tiring. Series Of Sneaks is one of my favorite records ever, and being on the same label as them is pretty incredible. I'm also mega in love with Destroyer, and I love all the records that he has put out on Merge. The 69 Love Songs set from the Magnetic Fields is a milestone for me, and it's also just such a beautiful and ambitious thing for a label to put out. It really says a lot about Merge believing in the music they release. Everyone there is absolutely incredible, and I've enjoyed getting to know everyone so much.

SJMJ: Playing with a full band – your Merge bio still includes the quote from Walla which states "On record, Michael Lerner is the sole member of Telekinesis, more or less." – how does this translate to playing with Chris, Jonie, and David every night?

MBL: Playing music with David, Jonie, and Chris is really incredible. They make this record possible live. It's a rock record, and one person absolutely can not play a rock record live. Not only are D, J, and C my best buddies, but they are some of the most incredibly talented and fun musicians to make music with. I feel like there is a certain energy that happens when we all play together that was totally impossible to capture on the record. A highlight (and testament to their musicianship) for me is the arrangement that we have made for a song on the record called "Calling All Doctors". It's really morphed into something totally different and that is really quite exciting.

SJMJ: Tour highlights – what was your favorite show, moment, or sight? [Or taste, purchase, anything…]

MBL: My favorite show was at SXSW. We played a Merge / Barsuk showcase, it was a really lovely night. Merge is our record label, and Barsuk is our management, so it was really amazing to be a part of a showcase that was for both of them. I feel like we played the best show of the tour thus far, and it felt really good. For a purchase, I was in Boston recently and I went to a record store called Weirdo. They had this incredible 60's French pop music compilation. I'm obsessed with 60's French pop, especially the whole ye ye scene (France Gall, Brigitte Bardot). It has made our drives even more beautiful and surreal, and that's exciting. Best food was in San Francisco. Paplote has the most amazing burrito.

SJMJ: Tour lowlights – on the other hand, what has been the low point of tour thus far?

MBL: The morning after all the SXSW craziness, we were gearing up for a 10 hour drive to Memphis, TN and I started throwing up. It didn't stop, and we had to get going, so I continued throwing up in the van. It was terrible. Chris started throwing up shortly after. It was really the most miserable drive and show I've ever had to do in my entire life. It was absolutely not fun.

The next day, in Nashville, Chris and I woke up feeling much better and then (like clockwork!) David and Jonie started feeling bad. Jonie started puking profusely. We played the show that night without her, and she ended up passing out in the van while puking. We took her (and David, who was feeling wretched too) to the ER. They got tons of IV and meds, and they got to where we were staying at 7AM. We had to cancel our show in Atlanta the next day, but we all started feeling better. It was a most trying couple of days. Yikes! Stomach flu's on tour are really no fun at all.

SJMJ: Inspiration – have you kept writing new songs while on the road? Your lyrics have previously included a lot of imagery of travel + locale – if there are new songs, are they shaped by the geography of the road?

MBL: I haven't written a single solitary song since being on the road! There is just really absolutely no time to do so, and especially being a 'studio' writer, it's tough for me to sit down with an acoustic and write a song. I definitely feel, however, that all of the incredible scenery that we have seen on this tour will seep into the lyrics somehow. I think it's inevitable! I'm obsessed with travel.

SJMJ: Foreign countries – I caught your name on the Moutique roster, does this mean there's a European tour in your future?

MBL: Yes! We are excited to be a part of that roster, and we're hoping to try to get to Europe before the end of this year. That would be a dream come true for me, and Chris has never been. He will flip his lid.

SJMJ: Last but not least: Seriously, did you lose your mind when you met Paul McCartney? [Ed.: MBL studied at the Liverpool Institute for Performing Arts where Sir Paul was present at his graduation.]

MBL: It was the scariest thing ever. I totally lost my mind. It was one of the most surreal things I've ever done in my life. I mean, come on! He's a Beatle!

For more TK! goodness, check out their video for 'Tokyo' created by the multi-talented Dianna Potter.