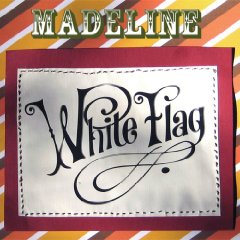 Madeline Adams has a voice that sounds frighteningly close to Joni Mitchell's and her band is full of a Southern twang that goes hand and hand with her quivering vocals. Pedal steel guitars and brushed snare drums permeate the new record, White Flag, with the flavor of Athens, Georgia, which is where it was recorded and also happens to be Madeline's hometown. Three years in the making, the record features thirteen songs that matured while being honed on the road.

This is singer-songwriter territory of the country sort that is complete with banjos, pianos and Southern porch on humid sunny afternoon guitars. Additionally, White Flag incorporates a brass section with the inclusion of trumpet on several tracks. "This Train" has the old country sound, that of Hank Williams and Johnny Cash during the Sun Records years. In fact, it sounds like it very well could be a cover of something from that era. The lyrical content concerns hopping on a train in the wake of a destructive relationship. In the chorus, Madeline sings "I would gladly lift your burdens/I am afraid I don't know how/It's a strange and heavy/strange and heavy load."

Other moments veer closer to Joni Mitchell in the early 1970s. "Rain Fire and Brimstone" for instance, captures the atmosphere of Court and Spark with both the vocal delivery and the simple, direct piano melody. The lyrics too, recall Mitchell. "Everyone of us/reaching for others/from the day we were born/'til we're pushing up petals." The sensitive longing of the written words is woefully projected by Adams' aching voice. Whether backed by a band or performing unadorned, Madeline Adams, who is in her early twenties, certainly sounds like she has the experience of someone ten years her senior.