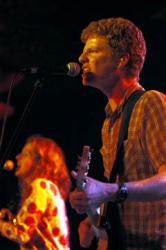 But at any rate, just a strong discography and impressively prolific lineup matters little when it comes to pleasing the throng of demanding KEXP listeners populating the Gorge. I'd never seen the band before, and I was a little concerned that the live sound of a band with so many instruments wouldn't be able to recreate such a distinct and creative studio sound, especially in the rushed festival setting.

But damn – they rocked like no other band I have seen in some time. I can only imagine what seeing them at the Showbox or at Neumo's would be like. MC David Cross, in an effort to stall while last minute setting up was done, decided to rattle off The New Pornographers' set list just before they took the stage. I was ecstatic to hear the name of the song I most wanted to hear announced as "Testament [to Youth in Verse]," where in the second half simple melody gets poured over simple melody until almost all six members of the band are singing "No, no, no, no, no…" and the organs and guitars and drums are bouncing about like fourteen simultaneous games of Pong.

Then there was the friendly stage banter towards the shirtless man dancing directly in front of me. In his shirtless state he could easily have been a poster-boy for beer gardens and sixteen-ounce cans everywhere. The band's comment: "Don't take your shirt off if you're not going to fuck us… you are a cocktease, sir."

Somehow, someway, it sounded quite polite. Maybe it was lead-singer Carl Newman's curly red hair and striped shirt. He looked like someone good at trigonometry. But math tutor or not, he and the band proved beyond a doubt that The New Pornographers are freaking awesome. So worth getting sunburnt and driving back across a rainy pass for. Gotta love having to be at work at 5:30 the next morning…