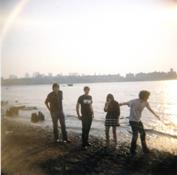 While I've been sifting through the imaginary mailbins the last week I've found a couple new bands with upcoming releases I'm really digging.

One in particular that I listened to all day yesterday was Murder Mystery. Their songs are cute and poppy, with catchy hooks and crackly deep vocals that have could have inspired Julian Casablancas.

Murder Mystery are from NYC and they'll be self-releasing their first album on January 29, 2008 and doing a big nationwide tour in early '08 to get the word out about their album.

I've found an MP3 of their song "Love Astronaut" for you to listen to / download until then. It's a bit glossy – but embrace it! The backup vocals of girlie drummer Laura Coleman are a sweet grounding force to the dancey keyboards and bass. Dare I say they're reminiscent of my long lost Stellastarr*?

To hear more songs, visit their MySpace and website.