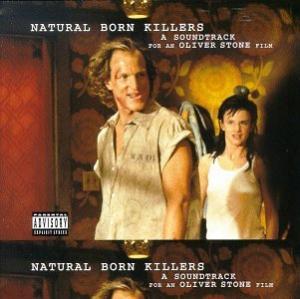 Remember, back in the day, when Natural Born Killers, the Oliver Stone movie, came out how everyone was so shocked and horrified. People were saying it was the end of human civilization and that dogs would live with cats and up would be down and Oliver Stone was the Great Satan. Well, none of that happened, no matter how much the trainwreck of a movie wanted it. Think about the cast of this movie for a second: Juliette Lewis – Hollywood’s signature whacked out woman of the mid-90’s, Woody Harrelson – I think he lives in a house made of hemp now, Robert Downey Jr. – he took 10 years off to be high, right? How Oliver Stone ever got a full movie out of the three of them is baffling even to this day. Somehow, Trent Reznor ended up with the duty to curate the soundtrack to the flick (side note: when did it become cool to refer to putting music together for a compilation or a show as “to curate”?) and well, the soundtrack might end of living longer than the film. Trent did a great job collecting songs ranging from his own band’s NBK-inspired “Burn” to Leonard Cohen to Dr. Dre to Jello Biafra’s Lard to today’s spin, the Cowboy Junkies. Sure, the song is a cover of the Velvet Underground, and sure Trent ruins a lot of it by overdubbing some of Woody and Juliet’s … er, Mickey and Mallory’s vapid dialog over the top, but the song just drifts through there like a cool breeze on a hot day in the desert. In that, it stands out from the noise. I’m sure if I wanted to waste a few hours and rewatch Natural Born Killers today, I’d be surprised how tame the darn film seems, especially after watching bloodfests like 28 Weeks Later, but then again, maybe I’m just desensitized to the whole thing now, and wasn’t that Oliver Stone’s point anyway?