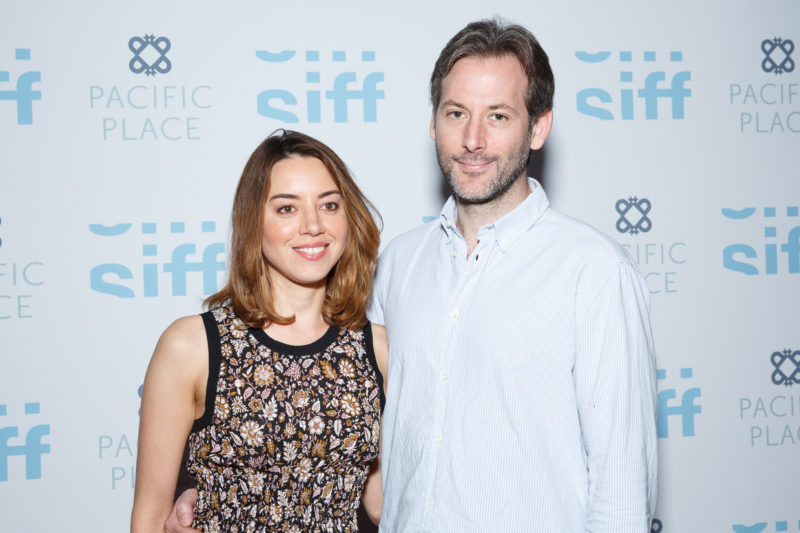 Talking with Jeff Baena & Aubrey Plaza about The Little Hours

The heavily improv’d medieval nun comedy The Little Hours screened at this year’s Seattle International Film Festival, and although I think the film suffers from a few drawn-out-too-long sequences, I really enjoyed watching Aubrey Plaza, Alison Brie, and Kate Micucci do their thing—specifically, screaming at men to leave them the F alone.

During the fest I was part of a roundtable interview with Director Jeff Baena and Producer/Star Aubrey Plaza {omgggggg Aubrey}! ICYMI: Jeff & Aubrey are a couple! {#RelationshipGoals} Now that the film has opened in wide release and is screening at SIFF Cinema Uptown, I can share what we talked about.

In my initial capsule review of TLH, I said that I couldn’t decide if the film was “a raunchy comedy about a group of nuns in the middle ages or a feminist statement about how women have always been treated like objects.”

When asked, here’s what Jeff & Aubrey had to say about the story being a statement about how women are still treated today:

Jeff Baena: I would say that was not as much an interest for me in this film; I was more interested in the context. Coming from Miami in the 80s and 90s, I wasn’t super exposed to history of Medieval Tuscany and the church, and I took a class that sort-of enlightening me. I read The Decameron … and I think the thing that was the most mind-blowing to me was that women became nuns not necessarily because they wanted to, but because convents were treated as a school—a place where they were sent until they were ready to be married off.

There were so many women that didn’t want to be there, so a lot of them rebelled and got into tons of trouble. It kind of blew my mind that we project this serious, religious life onto them [women during that time] and really they had just as rich of a life as us.

Aubrey Plaza: Truthfully, I don’t read things that way. I’m more interested in the human story. But I would say that one thing I really love about the movie are the female characters and how fleshed out they are and how interesting they are. And I think it’s rare for period films to have characters like that and have them not be one-dimensional characters. I think that’s something that Jeff is really great at.

And about that damning endorsement by the Catholic League:

Jeff: First off, I didn’t set out to make a raunchy movie—I just set out to do the best I could in contemporizing The Decameron itself. At no point was I trying to push buttons or elicit any controversy with the Catholic Church. This book is almost 700 years old; it’s been out there. The Church has dealt with it for a very long time. I think it’s almost like a reflex for them to come after this movie—they actually haven’t seen it. This isn’t me trying to be subversive; it’s just me trying to tell this one particular story.

When I did see that The Catholic League did that, it reminded me of when Lost Highway came out and David Lynch put on the poster, “Siskel & Ebert gave this two thumbs down; two more reasons to see it!” I really don’t want people to think I’m attacking the church, because that couldn’t be further from the truth. It’s really not about the controversy; it’s really more about finding a connection to the past.

About a favorite scene in The Little Hours:

Jeff: My favorite to shoot was the scene where the nuns are drinking and getting a little wild. There was a real, bold, fun energy to that day. The joy that you feel in the scene itself was what I was trying to go for with the whole movie. It’s almost like if you saw girls today getting messed up and singing a pop song.

Aubrey: I like that scene too; it was really fun. I also really enjoyed all the Chapel services. There was something kind of cool about being in church again and taking communion.

About Aubrey’s role as a producer:

Aubrey: I came on as a producer because Jeff and I have worked together on other movies; I helped assemble the cast, so it was just kind of a natural next role for me to take one. And I think this kind of movie is right up my alley—I love any movie that takes a major risk and does something you’ve never seen before. So having this movie as my first producing credit is really perfect for me and special because it’s exactly the kind of movie I want out there. Not just because of the comedy style, but just because of the idea of it; the fact that a bunch of money and people went into making something so insane.

Aubrey: In terms of my comedy style– I don’t know. I don’t think about projects like, “Oh I’m really gonna get my deadpan on.” It’s just when you’re an actor and you take on a part you only have yourself to draw on. My rhythms and the way I think and all of that comes into play when I’m creating any character, but I would hope that they’re always different and it’s not a distracting thing.

Aubrey: I grew up going to an all-girls Catholic school with nuns, and I would say I was rebellious so I relate to wearing a uniform, and being told to act a certain way, and always testing boundaries to see what I can get away with. [Fernanda] was also just the character I was given. I would have played any of the parts, but he wrote it. So … [turning to Jeff] why’d you make me do that?

Jeff: I was exploring different ways that women are forced into something, and the ways in which they cope with it. The source story is not at all detailed; it’s maybe 2 pages long. I tried to give each one of them a character that wouldn’t be too complex where it feels like we’re getting into a heavy chamber piece, and is light enough that’s it’s fun—but weighted enough that it feels historically accurate.

Aubrey: And you felt like for me, my thing would be that I’m secretly a witch.

Jeff: Well, the area we shot in was actually a pretty heavy witchcraft area back in that time period, so it was pretty historically accurate. It would make sense to me that there would be witches pretending to be nuns that are connected to the earth; they’re not evil witches. And Aubrey, to me, definitely has witchy elements. So I wanted to kind-of harness those elements in the character.

About the biggest unexpected challenge or obstacle they faced during filming {aka MY FAVORITE part of the interview}:

Aubrey: I would say just getting that donkey to do ANYTHING. Stubborn donkey. Pregnant donkey.

Jeff: The donkey was 11 months pregnant.

Aubrey: The donkey? I don’t know if she meant to get pregnant … {ALL THE LAUGHING}

{Laughing} I mean, did you choose a pregnant donkey?

Aubrey: It was the best donkey audition.

Jeff: They didn’t bring out a line-up of donkeys; it was just one. It was the donkey that we could get. We were in rural Tuscany, so slim pickens. It’s not they have a lot of films up there—they don’t have a lot of “picture donkeys”. It was the best one we could. We had a turtle that was SUPER professional turtle! But that donkey …

You can see The Little Hours at SIFF Cinema Uptown now through July 13. Tix at siff.net.