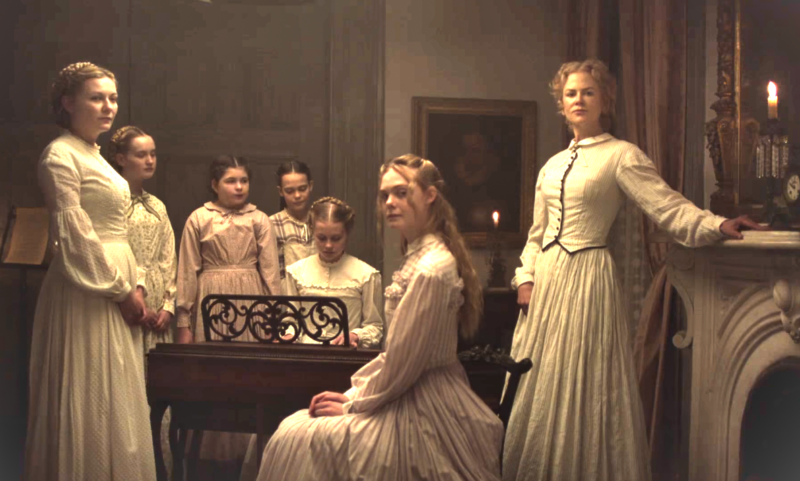 The plot of The Beguiled is a recipe for the perfect Gothic thriller: drop a wounded soldier from the North into the laps of seven bored and lonely Southern women stranded in a girl’s school during the Civil War, mix in a shitload of jealously, and see what happens.

Young Amy {Oona Laurence – goodgod this kid is GOOD} is picking mushrooms in the woods when she comes across Corporal McBurney {Colin Farrell} in distress, and brings him back to Miss Martha Farnworth’s Seminary for Young Ladies.

Most of the ladies, of course, are horrified to be taking in a Union solider in the South, but Miss Martha {Nicole Kidman} decides they’ll take him in and nurse him back to health until he’s fit enough to be picked up by Confederate soldiers and carted off to jail. At least, that’s the plan until McBurney turns on his full charm … but not so fast, Corporal. These ladies aren’t as gullible as you think.

Oof. Where to start with this? I guess with the things I enjoyed: the costumes; the gorgeous, gothic mansion; the way the gauzy heat of the South makes its way across the screen; the sly moments of incredible tension—and honestly, the way “not all men” McBurney gets his final comeuppance.

And then there were the things I was not so thrilled about: the way every female seemed like a caricature {Elle Fanning as Alicia practically chewed Colin’s entire face off with her smile in every scene}—all of them needing a man to validate them in some way; all of them seeming incomplete until McBurney turned his attention to them.

I left feeling irritated that there wasn’t more depth to the characters, and even though I for sure wasn’t feeling like I was on the Coporal’s side, I wasn’t real convinced I should be rooting for a bunch of rich, white women in the South during the Civil War either.

Since I watched Coppola’s version of this story before I knew there was a previous film (there are some pitfalls that come with NOT reading much about a film before seeing it in order to be as surprised as possible), and before I knew anything about the book both films were based on, I wasn’t even aware that there is another character in both the novel and Don Siegel’s version.

I didn’t know the character of Hallie, a black slave in Miss Farnworth’s home, existed. Something which would have changed the lens of the story dramatically—something which I would have liked to have seen.

Since many other writers have done a much better job explaining why that was a dumb omission on Coppola’s part than I can, I’m going to provide a couple of links here that you should read:

Southern Gothic, Slavery, and the White Femininity of Sofia Coppola’s The Beguiled

Here’s hoping Sofia takes all of this criticism in, digests it, and thinks more carefully about her choices in the future.