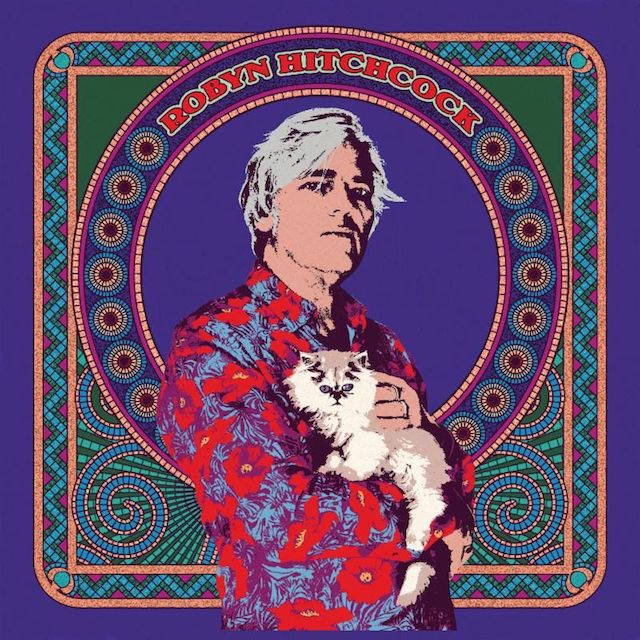 It is a little odd that Robyn Hitchcock has just released an eponymous album forty-one years into his musical career. Then again, Hitchcock has seemingly always managed to do whatever he pleases just outside of the fringe of the mainstream music industry. Perhaps even more odd is that the eccentric British artist now lives in Nashville, Tennessee, which is where his new album was recorded. After an impressive resume of brilliant records with The Soft Boys, The Egyptians and solo, Robyn Hitchcock contains exactly what we have come to expect: strange song titles, surreal lyrical tales, off the wall whimsy, erudite humor, late-sixties influenced psychedelia and ten consistently good songs.

So, is there anything different this time around? Since Hitchcock now lives in Nashville, there are a couple of tracks on the new record that feature a country-inspired sound. “I Pray When I’m Drunk” is a classic electric country rock number while “1970 in Aspic” is an acoustic song that is augmented by pedal steel guitar and a Byrds-esque jangling lead-guitar. These two songs are relatively new territory for Hitchcock, and they are indicative of how he can take on a variety of styles and make whichever template he chooses work without sounding forced.

However, the country influence of his current Nashville surrounding does not necessarily highlight where Hitchcock shines as a songwriter. His strongest source of inspiration will always come from 1960s legends such as The Beatles, The Doors and Syd Barrett. “Autumn Sunglasses” is a psychedelic classic that would fit into any of his best records. The introduction and ending include backwards guitar and the shimmering reverb sound of the melody is instantly memorable as a Hitchcock standout.

“Virginia Woolf” and “Mad Shelley’s Letterbox” are solid rock songs. In fact, they are just as solid as anything in Hitchcock’s catalog. Either one could fit in perfectly on Element of Light, Queen Elvis or Fegmania. “Sayonara Judge” is a beautiful and somber composition. Hitchcock sadly sings the opening lines, “Losing my face, losing my friends, losing my temper, losing my place on the map, losing my home…but I’m walking on air,” as though he is beginning to feel that his legendary career might soon be coming to a close.

“Time Coast,” the last track on the record, is another highlight. It’s a powerful blast of 1960s acid laden rock and roll that closes another already strong album. Hitchcock delivers the lines, “I’m singing like a fossil. Time goes so fast,” as if pondering how rapidly time has slipped away. Remarkably, he is one of the very few artists whose voice sounds identical, from his early records with The Soft Boys all the way through this new self-titled disc. It is truly incredible that his voice has not weathered one bit over the four decades that he has been recording his vocals and immortalizing them on his releases.

The new album features two well-known guest vocalists: Grant-Lee Phillips and Gillian Welch. The former sings harmony vocals on “I Pray When I’m Drunk” and “Raymond and the Wires” while the latter sings harmony vocals on the aforementioned “Autumn Sunglasses.” Robyn Hitchcock is perhaps deliberately concise, clocking in at about thirty-six minutes, which reminds the listener of the typical album length of records from the 1980s when artists issued a new release every year. Maybe Hitchcock isn’t slowing down a bit after all. It certainly doesn’t seem to be the case, considering that he is far more prolific than most of his contemporaries.

Robyn Hitchcock will be in Seattle on the 21st of July where he will be performing at The Showbox with The Psychedelic Furs. His last LP, 2014’s excellent The Man Upstairs, even includes a gorgeous acoustic cover of their song, “The Ghost in You.” Hitchcock is known for performing several interesting covers in his live sets. There seems to be a good chance that he will include his lovely tribute to The Furs that evening if we are lucky.