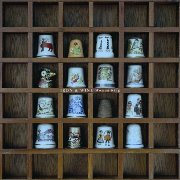 The written word succeeds best when it is not approached as a narrative, but when it is approached as a mosaic of images and actions which when put together, form a complete idea, emotion, story. Poetry is essentially brief glimpses of a scene or emotion, painted or sculpted in words with a pleasing rhythm, pleasing brushstrokes. Novels can do the same thing but on a much larger scale, and usually employing more of a focus on a resulting narrative.

And because he approaches composing songs from a somewhat different angle than perhaps most singer/songwriters do, Sam Beam (aka Iron and Wine) is one of today's most talented lyricists — not because he writes stories in his songs, but because his songs paint pictures with brief images that serve as intimations to some grander, ambiguous idea behind what he is showing you.

Iron and Wine's most recent release is the six-song EP, Woman King. The songs on the record deal with some of Beams favorite images — the shapes of sleeping women, the wings of birds, a delicate noise of countryside.

Miami-based Beam taught cinematography and screenwriting at the college level for some time, and there is no hiding his photographic sensibilities in the structures of his songs. Polaroids of his imagination would be velvet and watercolored.

At once brilliantly intimate in his acoustic guitar and soft voice, Beam invites the listener to enter a surreal world on his new EP — more successfully on Woman King than on any of his previous records. Having already recorded the delicious Our Endless Numbered Days in the studio setting two years ago, Beam shows a new comfort in the ways of a studio as opposed to tracking over instruments himself — as he did on his first two releases.

The new record begins with the title track. Beam sings a call-and-response between images of an old, glorified South — "Blackbird claw, raven wing/ Under the red sunlight/ long clothesline, two shirt sleeves/ waving as we go by" — and a chorus which proposes the idea of a woman taking on the role of a king — "Hundred years, hundred more/ Someday we may see a/ Woman king, sword in hand/ Swing at some evil and bleed."

The record moves on to "Jezebel," a sweetly sinister ballad about the Biblical Queen of Israel who tried in the most evil of ways to impose her heathen beliefs on those she ruled. In Beam's world, however, Jezebel is shown as a helpless and lost individual being chased by a pack of dogs, metaphors for perhaps gods or perhaps her people. Beam asks, "And who's seen Jezebel?/ She went walking where the cedars line the road/ Her blouse on the ground/ Where the dogs were hungry, moaning."

Next is "Gray Stables," a song which recalls misty images of Ophelia and medieval forests in its harsh tribute to a "brave lady" — "Brave lady, I could see you through the mosses/ laid, shameless in the sun…gray stables and the horses of the/ righteous/ pray daily for the brave."

Then there is "Freedom Hangs Like Heaven," an epic track which takes Beam into the rock-and-rollingest territory he's ever been, all the while talking to the Virgin Mary, "carrying her babe" whilst the oil lamps sing to her, "freedom hangs like heaven over everyone."

The best song, however, the song which let me feel the blood in my veins, is "My Lady's House." It's a short and simple, acoustic guitar love ballad, akin to the tear-conjuring "Naked As We Came" from his last album. Halfway through the ideal finger-plucks on his guitar, a piano enters and takes the song into an entirely new aesthetic. The sweeping gorgeousness of the written words are complemented by the rhythm and timbre of the voice and instrumentation to make the verse when Beam sings, "It is good in my lady's house/ every shape that her body makes/ love is a fragile word/ in the air, on the length we lay."

For those fans already familiar with Iron and Wine, the six songs on Woman King will be the logical next step in an already impressive catalogue. For those who know Iron and Wine only for his cover of the Postal Service's "Such Great Heights" on the Garden State soundtrack, then the intimacy found in the soft recording for Zach Braff and Natalie Portman will only be multiplied in this brilliant EP.