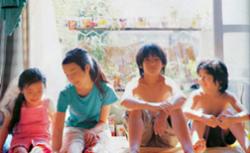 Nobody Knows and Dear Frankie

I hesitate to slap the "horror" label onto Hirokazu Kore-eda's latest, Nobody Knows, though it certainly worked its way under my skin like nothing else in recent memory. Inspired by actual events occurring in late-'80s Tokyo, and shot in chronological order over more than a year, this wrenching story of a mother's ultimate neglect of her four children is the most affecting piece of cinema I've encountered so far this year.

You suspect that something isn't quite right when you realize that the mom (played to fly-by-night perfection by a faded pop star known as YOU, which I swear I'm not making up) has smuggled the two younger children into the family's new apartment… in suitcases. But this is played to comic effect, and the moving-day exposition provides beguilingly natural introductions to adorable preschooler Yuki (Momoko Shimizu); rambunctious kindergarten-aged Shigeru (Hiei Kimura); forlorn pre-adolescent Kyoko (Ayu Kitaura); and keen 12-year-old Akira (Yûya Yagira), the elder brother of the bunch who winds up caring for this little clan when mom decides to abandon them all, leaving behind nothing but a pithy missive and an envelope full of 1000-Yen notes.

The more furious I became with the mother character, the more I thought about I'm Not Scared, another adults-can't-be-trusted film in which a group of young'uns sort out for themselves the problems caused by their parents' selfish agendas. Nobody Knows does an even better job of showing childhood in all its wild exuberance, which makes the dark turns (not to mention the quietly devastating finale) all the more painful — one minute the children are talking My Neighbor Totoro, the next they're drawing lovely crayon portraits of their long-absent momma on the backs of past-due utility notices. Brilliant young Yagira (his voice cracked and his hair grew out of control during filming) is the standout in a film brimming with fine performances; witnessing Akira's innocence give way to survivalist cunning is amazing, and heartbreaking, to behold.

Nobody Knows is all-around masterful, and there's little doubt that it will make my best-of-'05 list. But I have big reservations about recommending such a twisty emotional wringer (even the bruising Million Dollar Baby's got nothin' on this), and nearly a week after seeing the film I'm still not quite over it. I don't know that I ever will be.

I still wince as I consider even the film's most beautifully jubilant moment. One day Akira takes his siblings' shoes out of a closet and lets them put them on, then takes the children outside for the first time in months. It's a simply astounding scene of bright abandon, set against a great, open, completely indifferent world.

Another gritty film about childhood, and one much more easily digested (but far less affecting) is the Scottish drama Dear Frankie. When we first meet its charming nine-year-old title character (Jack McElhone), he and his mom (Emily Mortimer) and grandma (Mary Riggans) are moving to Glasgow. It's obvious that they've all done this before, and come to find out their lives are continually about running away. What's not apparent at first, though, is that Frankie is deaf, and that what they're all running from is his very unpleasant-seeming dad.

Frankie periodically writes letters to his absent father, but it's really mom who has been responding. When she learns that dad's ship is coming to dock in a couple of days, she concocts an odd plan to find a man (Gerard Butler) to play Frankie's pop for a day. It seems like a cruel ruse at first, and then we learn (and gradually accept) her motives. Where it all goes from there is a pleasant little surprise.

The acting here is very good, and young McElhone is top-drawer as Frankie. Butler, last seen in Joel Schumacher's film adaptation of the Andrew Lloyd Webber abomination The Phantom of the Opera, is quite easy on the eyes, and great in the role of the mystery man. Frankie's school pals (bullyish S and sassy ean BrownJayd Johnson) and family friend Marie (Sharon Small) also deserve shout-outs.

As Scottish films go, Dear Frankie is on the gentle side — the tormented characters of Morvern Callar and Sweet Sixteen obviously walk the darker streets down the way — but none of it ever seems disingenuous. First time feature director and cinematographer Shona Auerbach does an admirable job of telling a sentimental story (complete with a warm visual sheen atop Glasgow's brown-gray grunge) without letting it descend to sappy Lifetime® fodder.