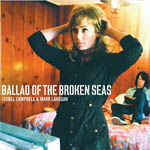 The Ballad of the Broken Seas

One of my favorite movies as a youth was the woefully underappreciated Wim Wenders film Until the End of the World. The messy, convoluted movie had possibly the best soundtrack ever, setting the slightly sinister mood for the film without erring toward over-the-top melancholy. Isobel Campbell and Mark Lanegan (formerly of Belle and Sebastian and Screaming Trees, respectively) have created an album comes closest to recreating that seductive, chilling mood in The Ballad of the Broken Seas.

The most striking element of The Ballad of the Broken Seas is the stark contrast between the two vocalists. Lanegan's low, growling voice snarls the opening verse of "Deus Ibi Est," reminiscent of Crime & the City Solution, and is balanced by Campbell's angelic, lilting vocals, which soar about the pounding drums and stripped-down guitar work. This pattern repeats on "Revolver," a sinister song backed by a Kronos Quartet-type string section. Lanegan and Campbell sing:

The varied influences of the album become apparent early on. "Black Mountain" sounds like an updated Irish ballad featuring Campbell's gentle vocals in the forefront, while "The False Husband" has a similar feel to Nick Cave & Kylie Minogue's "Where the Wild Roses Grow," with the back and forth between the two protagonists of the song's tale of betrayal and mistrust. The heavy influence of the Bad Seeds is also evident on the title track, which could have been an outtake on Cave's The Boatman's Call, right down to the measured rhythm and echoing piano. "Ramblin' Man" combines elements of Johnny Cash and Sixteen Horsepower and adds in Julee Cruise-like vocals by Campbell over Lanegan deep, intoned voice. The album's closing song, "The Circus is Leaving Town," captures a profound sense of loss, with each painful note feeling like Lanegan is losing much more than, well, a good circus show: Remember that old song/we had when we were young/life was an empty page.

The most upbeat song on the album is the downright cheerful (well, by these standards) "Honey Child, What Can I Do?" In fact, it's so cheerful that it almost doesn't fit in on The Ballad of the Broken Seas; rather, it sounds like a Belle & Sebastian B-side, and the dark nature of the song somewhat overpowers Campbell's voice. Same for "Saturday's Gone," a dirge where Campbell's voice gets lost in the atmospheric tones and deep bass line… her vocals almost become dreamlike, especially when contrasted with the violin solo that wakes you back from the hypnotic spell cast by Campbell.

The Ballad of the Broken Seas can be uneven and at times vocally mismatched, but when Lanegan and Campbell strike the correct combination of melody and mood, the result is truly captivating. In that sense, Ballad is like the long-lost Until the End of the World: an experience that can appear messy and confusing at first, but one that rewards deeper exploration with dazzling nuances, mood, and emotion.