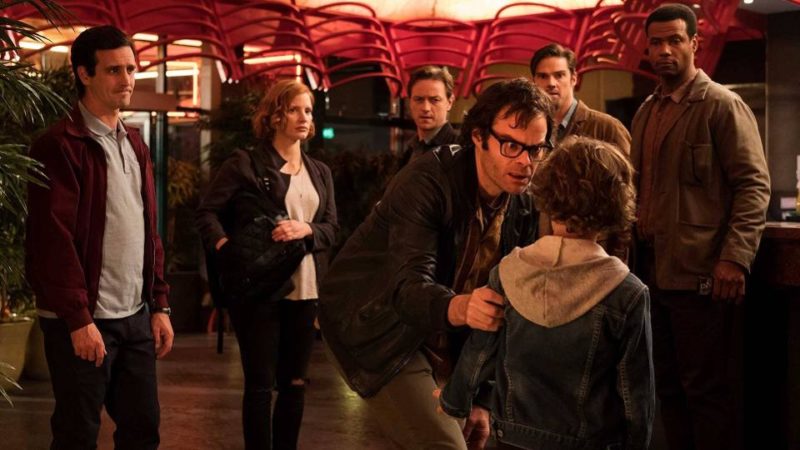 While I had a great time watching It (Chapter One? I guess?) and reveling in its sweet, sweet 80s nostalgia, It Chapter Two did not fill me with the same splattery glee.

Two jumps forward 27 years to 2015 to show us The Losers as adults, all of whom have no memory of their time growing up in Derry, or of battling “IT.” Everyone, of course, except Mike Hanlon, who has stayed behind to study the history of the town, watch for signs of It returning, and try to find a way to get rid of the monster for good.

Like this section of the book, the movie opens with a homophobic hate crime: a gang of toxic masculine a-holes can’t stand seeing Adrian Mellon and his boyfriend Don kiss, follow the two men onto a bridge, beat Adrian to a bloody pulp, then toss him into the river. Don manages to break free and get down to the water, just in time to see Adrian in the arms of Pennywise who strikes the killing blow with his toothy mouth.

The police radio alerts Mike to a dismembered body, and when he arrives on the scene he finds a deflated red balloon and a message to “Come Home” written over and over again in blood. And so Mike calls up the Losers to remind them of their long ago promise: Bill, now a famous author — with a running gag that no one likes his endings (SEE BECAUSE STEPHEN KING); Eddie, now a Risk Analyst (I guess Limo drivers aren’t 2019 enough); Ben, now a VERY rich architect; Ritchie, now a famous comedian; Beverly, now a famous fashion designer; and Stanley, now some kind of professor.

And so The Losers reconvene to try and beat the evil for good, you know, FINALLY. But of course it’s not that easy. They’ve got to face their greatest childhood fears, complete an ancient ritual, and endure 100s of “I fucked your mother” jokes and a lot of fat-phobic comments (yes, I know King’s book includes the fat phobia but JFC people, this is 2019. You stripped the ickiest part of the kid stuff from the first movie, why feel like you have to include this shit?).

Oh, and there’s also Henry Bowers, the bully who took the blame for the murders back in the 80s and now lives in the asylum, mullet still intact just for the sole purpose of one throwaway joke. Henry is basically Pennywise’s Renfield: a faithful servant who will do whatever the clown wants, which is essentially stabbing everyone in sight. He’s in the movie so little, though, that’s there doesn’t seem to be a point to him even being here.

The best scenes are the ones that have Pennywise stalking kids (again) — a boy stuck in the hall of mirrors inside a funhouse; a little girl lured under the bleachers — those scenes were full of all the terror and fun of the first time. But even with those moments, Two didn’t come together for me the same way One did. It relies on way too many stupid jump scares, and the monsters go from terrifying to ridiculously overblown and cheesy to the point that they just. aren’t. scary.

The Losers also aren’t as easy to get invested in as adults. It’s worth noting that this was a problem in the original 1990 miniseries too. All the pages King includes in the book that flesh out the characters doesn’t translate on screen, even in 2 hours and 45 minutes. The cast is terrific, but there isn’t enough time spent on who the adults have become. The empathy and kinship you felt for those kids just isn’t here for them as grownups.

Also, TBH, I feel like Mike Hanlon gets the shaft AGAIN. The rewriting of his character arc; the way they have him act; even the things he says just infuriates me. The miniseries, for all its faults, did Mike 100% correct.

There’s also a definite disconnect between the brutal beatings of Adrian Mellon and the terrifying scenes of Bev getting beat up by her husband and the extremely cartoonish way in which It tests them all. My friend Matt mentioned that it was like they turned this chapter into a “serious Beetlejuice” — and he’s right, it was.

The whole thing is an overlong, jumbled, unenjoyable mess and the few flashbacks from the first movie only serve to highlight how empty this one feels.

Long story short: I have a new answer when someone asks me what the worst horror movie sequel is.