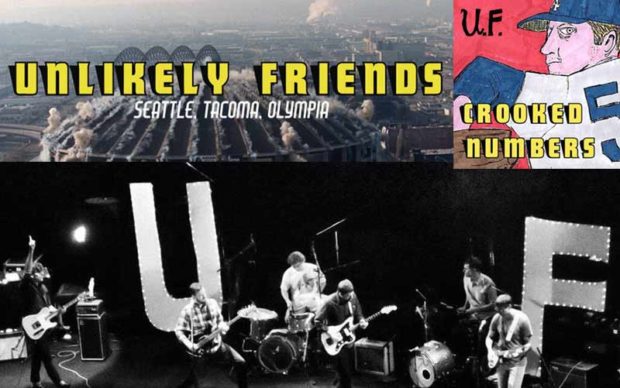 You’d think that my favorite part of the Unlikely Friends story is that they formed in the most imaginary of ways: D. Crane (of my favorite band: BOAT) and Charles Bert (of my favorite band: Math & Physics Club) first played together at Three Imaginary Girls ice cream social (which was part of our series of 10th anniversary shows) back in 2012.

Actually, what I {currently} love most about the band is I’m pretty sure their latest album, Crooked Numbers, was made precisely for those of us who love fun lo-fi rock songs laden with visceral stressed-out adultness, fears of complacency, and tales of compromise and regret. Hey, that’s me!

Even with the grown-up gripes, the songs are boisterous with a lighthearted finish. There are stand out rockers like “15 Rounds” and “All the Cameras in Japan,” and others that bind those climatic moments with unexpected nostalgia {“39 Steps” and “Kool-Aid Smell”} and eccentricities {“The Best Trick in Modern Science” – yes, I even sing along the part about the frog}.

“Cut Loose” has a place near and dear to my heart because of the “circle round the moon” refrain – perhaps Unlikely Friends have been listening to Nana Grizol {which is a major plus in any playbook}? The album wraps up with “The Strangest Kind” – a wonderfully quirky love song.

There’s an ease to how the collection falls into place, thanks to the band’s natural aversion to overthinking things. They took lessons from Superchunk, Pavement, and Beulah – playful guitar swerves steering songs without an ounce of pretension.

I keep coming back to “Broken Again” perhaps because it’s the most quintessential Crooked Numbers song on the album:

I’m forty years old and my hair is going gray
There’s ringing in my ears that won’t go away
Too many bars, too many bands, and not much else
But I’ve got a new plan

For an album that focuses on imposter syndrome and feelings of being misunderstood, it makes those of us of a certain age feel understood. The songs are the homerun cheers that only we can hear.

Celebrate the release of this highly {and imaginarily} recommended album on Saturday, February 24, 2018 at Full Tilt Ice Cream Parlor in Capitol Hill. The band is going to play a set of their songs and Full Tilt will have a new, limited edition flavor to mark the night of amazing songs. I usually go right towards their almond bliss or coffee oreo flavors, but I’ll need to add a scoop of the “Cookied Nom-Brrs” flavor – banana ice cream with crooked amounts of nilla wafers, marshmallow, and swirls of caramel (more info).

And rumor has it, tapes will be available!

Here’s how it went last time they were in the KEXP studios playing songs from the first Unlikely Friends album {Solid Gold Cowboys}.