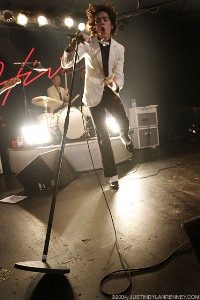 Doesn't it feel like a long time since we've heard from those rock n roll strutters, the Hives? Good news… they are alive and still recording… and Head Hive Pele Almqvist, apparently, is hitting the Waffle Houses with Jack White!

This just in from NME: The Raconteurs have collaborated with The Hives on their new album.

As previously reported the Raconteurs have written 12 songs for the follow up to their 2006 debut Broken Boy Soldiers, and are currently holed up in Blackbird Studio in Nashville.

Posting on Hivesmusic.com, the Swedes' frontman Pele Almqvist explained in his online diary he had collaborated with Jack White and co.

He wrote: "April 21: Had breakfast with Jack White. Recorded footsteps for the new Raconteurs album. Those are some great guys."

Jack White recently declared that the sound was "very different" to the band's debut album.