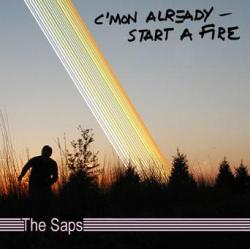 Chicago’s The Saps have made one heck of a record with C’Mon Already, Start A Fire. The band has only four members, but their sound is much larger — as though an army of musicians high on caffeine has thrown a party in your living room. (Three of the songs actually were recorded in a living room, incidentally.) Vocal harmonies abound, and beats are the sorts that make you bob your head along even when you’re listening on your headphones in the middle of a crowd of strangers. It’s that catchy.

The sound, driven by both acoustic and electric guitars, is smarter than the usual indie schtick. One could imagine a lesser band creating similar songs with less flair, but The Saps have taken the basic song structure and carefully added exactly the right embellishments to create songs with extra dynamic, resulting in songs that remain satisfying upon repeated listen.

There’s a definite classic rock/pop vibe underneath layers of indie-pop rhythms and alt-country vocals. Each song stands out in a different way — be it masterful vocal interweaving and harmonies (“You Bought It Now”), exhilarating guitar work (“The Way You Want Me To”), or catchy hooks (pretty much all of them, really). At the slowed down moments (“Broke My Spine,” “Tight Lines”), the songs are full of heart and passion; when they pick up the tempo again it’s quite simply music that makes you happy.

The band hits a home run lyrically as well as musically. Vocalist/guitarist Dan Lastick, who is credited with the songwriting (with help from bassist Tony Sacket on “You Bought It Now”), tells stories and creates scenes with irreverent lyrics. “On the day that I was born / they dropped me on the floor / and still you got to work on time,” begins the first song, “Coup de Grace,” instantly commanding your attention. The song, a perfect choice for the first position, leads into the giddy “Hospital,” which spirals into a frenzied finish. Next is “The Way You Want Me To,” which launches with a classic rock-flavored guitar intro and then scores big with Lastick’s impassioned vocals, especially in the bridge.

“Dead Friends” continues the raucous beat and charming lyrics: “Grab the shovel girl, and you can bury the real bad times.” Then along comes “Broke My Spine,” a gorgeous ballad of epic proportions. It’s followed by “You Bought It Now,” possibly the best song on the album, with dualing lead vocals, plenty of harmonies, and of course, a catchy chorus.

“Making Connections” has wry vocals and a fun bass-guitar interplay. “Tight Lines” is a song about fishing, as stated at the beginning, and is a slow guitar-and-vocals tune with playful fishing-inspired lyrics: “The ones the get away tend to die.” “Cicero” employs a more country-tinged guitar, while telling an offbeat love story: “He took her to a porno / it was an artsy flick at best / and he was always happy / just staring at her chest.” Finally, the album closes with “Ohio,” the rockingest and least-hooky song on the album, which evolves into a festival of percussion, handclaps, synth effects, screams, and general controlled chaos. Then blammo!, it’s all over.

And then you start the album again because it was so good.

Hope The Saps have their suitcases packed, because they’ve made a thoroughly enjoyable album that deserves national attention.