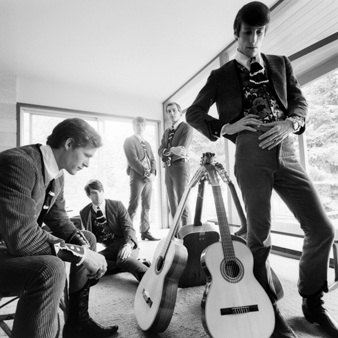 Jini Dellaccio exhibit and tribute at the Crocodile Friday night

Legendary rock photographer Jini Dellaccio is turning 92 years young – and is celebrating that and the release of a collection of some of her best photography in a new book called Jini Dellaccio: Rock & Roll tonight (Friday, April 24) at the Crocodile.

According to the press release (which I'll quote at length):

An extraordinary exhibition of Dellaccio’s photographs of this period, together with the debut of the book, will be held on Friday, April 24 at The Crocodile in Seattle. Highlights include a musical tribute featuring some of the original practitioners of the first “Seattle Sound,” who will be joined by the next generation musicians influenced by the music of the era.

This occasion also celebrates the artist’s 92nd birthday. Dellaccio will attend the reception.

As a fine art photographer, Jini Dellaccio brought a remarkable degree of sophistication to her portraits of blue collar rock musicians of the early- to mid-60’s. Her iconic images of seminal proto-punk bands such as the Sonics, Wailers, Daily Flash, Don and the Goodtimes, and countless others, capture both the aesthetics and attitudes of these influential groups.

Many of Dellaccio’s photographs were shot among the lush landscape of her Gig Harbor property, and reflect the conventions of the dominant “Northwest School” art movement of the region. Her candid concert photographs – featuring local groups as well as legendary touring acts including the The Who, Yardbirds, Mitch Ryder and the Detroit Wheels – mirror the raw, energetic, and often menacing music that characterized early Northwest rock ‘n’ roll. A slide show of images from the book and exhibition can be viewed at: http://www.jinidellaccio.com/

Following a private reception for Dellaccio’s many friends and family, the public is invited to join the festivities at 9:00 PM. A nominal $10 admission fee may be applied to the purchase of the book. Deejay Dave will spin period platters, followed by the musical tribute to Dellaccio.

All of this opens to the public at 9pm on Friday night. See you there?