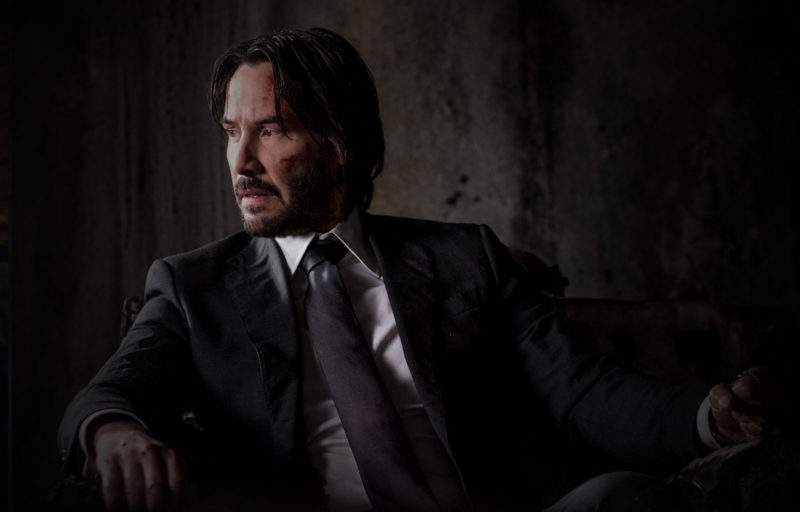 Poor John Wick. All this dude wants to do is retire and have time to grieve his sweet departed wife, and the criminal underworld just. won’t. let. him.

Picking up shortly where we left off in the original, John Wick: Chapter Two throws us right into an insane car chase, wherein our beloved Mr. Wick is completing the last item on his list of revenge: getting his 1969 Mach 1 Mustang back from the uncle of the shit head who stole it while said uncle {Peter Stormare! He’s the best} tries to explain to his bodyguard why they’re all going to die.

After 20 minutes of motorcycles falling off bridges, cars bouncing off cars, and eventually BODIES bouncing off cars, Wick gets his car back, goes home to his (new) dog, and is out of the business again and just trying to fucking live — only, you know, he can’t.

Shortly after, his old pal Santino shows up and demands Wick pay his dues: a marker which requires him to do a favor, mainly, uh, killing someone who’s in his way. When Wick refuses, Santino busts out a rocket launcher and blows up his house (don’t worry guys! this time the dog is ok).

So JOHN WICK IS BACK. AGAIN. But! There are complications. Diving even further into the depths of the secret International assassin network introduced to us in the first film, we learn there’s a High Table (Illumnati, much?) ruling all, and the rules don’t allow for Wick to kill Santino, because that marker means serious business.

So what’s a trying to be retired assassin to do? Answer: shoot and hand-to-hand combat his way through hundreds of men and women in underground Italian catacombs, NYC subways, and a hall-of-mirrors art gallery installation, of course.

ALL of them are perfect. Including Keanu, of course, whose broody expressions, low-key line delivery, and ability to flex his face in the subtlest of ways make him positively born for this role.

Oh, and that secret society thing? It gets even weirder. Turns out the contracts to kill are filtered through a giant room full of tattooed pin-up girls who use old-school telephone switchboards, typewriters, and pneumatic tubes to deliver the message to a computer that …. texts … them to assassins? I guess? I don’t know. It looked super cool so I’m good not asking questions.

If you’re looking for a fun two-hour escape from the world {and who ISN’T right now?} this is it. End-to-end action, tension, and WTF moments. Chapter Two is just as good as the first, if not better.

One last note: at the end of the screening, my mom leaned over and said, “I stopped counting at 48 bodies,” so that should give you some idea of what movie you’re going to see.